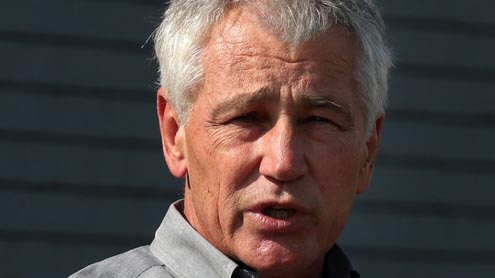 MANAMA: The United States is committed to maintaining a 35,000-strong force in the Gulf region regardless of a nuclear deal with Iran, Pentagon chief Chuck Hagel said Saturday in Bahrain.

The United States has an armada of ships and aircraft in place and “will not make any adjustments to its forces in the region — or to its military planning — as a result of the interim agreement with Iran,” said Hagel, according to a prepared text of a speech. In a trip meant to reassure Gulf Arab allies worried about America’s diplomatic opening with Iran, Hagel enumerated a list of US weaponry and resources that will remain deployed in the region. “We have a ground, air, and naval presence of more than 35,000 military personnel in and immediately around the Gulf,” he said, according to the text released in advance of his speech in Manama.

The military footprint includes 10,000 US Army troops with tanks and Apache helicopters, roughly 40 ships at sea including an aircraft carrier battle group, missile defence systems, advanced radar, surveillance drones and warplanes that can strike at short notice, he said. “We have deployed our most advanced fighter aircraft throughout the region, including F-22s, to ensure that we can quickly respond to contingencies,” Hagel said. “Coupled with our unique munitions, no target is beyond our reach,” said Hagel, in an apparent reference to “bunker buster” bombs designed to penetrate deeply buried targets.

Some of Iran’s most sensitive nuclear sites are believed to be located underground and Washington has publicised the development of weapons capable of striking buried bunkers. Speaking at an annual security conference in Manama organised by the International Institute for Strategic Studies, Hagel also noted investments in minesweeper ships and a $580 million construction project for the US Fifth Fleet headquarters, the naval command in Bahrain that oversees vessels across the Middle East.

US not in ‘retreat’

A senior US defence official, who spoke on condition of anonymity, told reporters the speech was intended to send a message of solidarity to Gulf allies while also conveying a warning to adversaries “that any sort of mythology of American retreat is just wrong-headed. ”The remarks came a day after Hagel told sailors on the USS Ponce docked in Bahrain that he would “assure our partners that we’re not going anywhere”despite the diplomatic gambit with Iran.

Gulf allies, especially Saudi Arabia, are concerned over a November 24 interim accord between world powers and Iran that offers limited sanctions relief in return for Tehran rolling back elements of its nuclear programme. Washington’s reluctance to intervene against Syria’s President Bashar al-Assad, a staunch ally of Tehran, as well as budget pressures and a US “rebalance” to Asia have raised doubts among Gulf governments and Israel about America’s influence in the region.

The details of the US military’s presence around the Gulf are not new. But by having the defence secretary lay out the details of the military’s deployment in a high-profile manner in a Gulf state, US officials hoped to ease strains with its longstanding partners. Although the Pentagon faces the prospect of steep budget cuts, the large US presence in the Middle East would remain a top priority and largely shielded from major spending reductions.

In addition to keeping a robust US force in place, Hagel vowed to bolster the military strength of Gulf states while pursuing major joint exercises and training. He proposed a new initiative that would allow the Gulf Cooperation Council (GCC), that includes Saudi Arabia, the United Arab Emirates, Qatar, Kuwait, Oman and Bahrain, to qualify to purchase US weapons as an organisation.

The idea is to encourage closer security cooperation among the Gulf states, especially on missile defence, Hagel said. Washington for years has tried to persuade the Gulf governments to forge a common missile defence networks to counter Iran’s growing missile arsenal but the effort has produced mixed results.

The Pentagon “will work with the GCC on better integration of its members’ missile defence capabilities,”Dawn