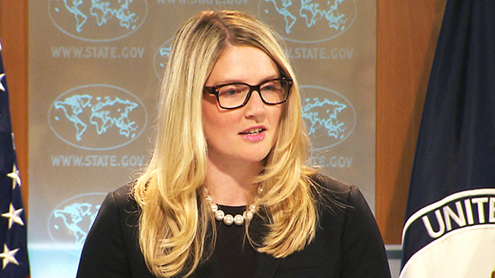 WASHINGTON: The State Department Wednesday said the US favors using Pakistani overland routes for retrograde movement of equipment out of Afghanistan and voiced the hope that the current situation in Khyber Pakhtunkhwa, with regard to Torkham route, would not have a long-term impact.

“We favor shipping cargo via Pakistan because of the cost. And hopefully I don’t anticipate that there will be any long-term impact to our retrograde movement because of the current situation,” Deputy Spokesperson of the US State Department Marie Harf said at the daily briefing.

She was responding to a question about the viability of Pakistani ground lines for communication (GLOCs) for US shipment of equipment as the US,currently moving cargo out of landlocked Afghanistan in view of 2014 drawdown, temporarily suspended shipments through the Torkham Pass.

The Pentagon on Tuesday said it had voluntarily halted the movement of cargo through Torkham gate in Khyber Pakhtunkhwa, where Pakistan Tehrik-i-Insaf activists have been protesting against US drone strikes and threatening to halt return movement of equipment that moves through the province to Karachi port.

Right now, she said, the US is not able to make shipments via Torkham, one of the GLOCs, because it does not think that it is safe for drivers to perform their work. She explained in reply to a question that the US has been working to bring flexibility and redundancy into its overall system for use of air, sea and ground transports because sometime there are things happening and it cannot use a certain transport route.

In answer to another question, the spokesperson said US Special Representative James Dobbins is visiting Afghanistan as part of his regular regional consultations.

His talks will focus on preparation for the 2014 Afghan presidential election as well as consultations following Pakistani Prime Minister Nawaz Sharif’s visit to Kabul, the spokesperson said.

The US-Afghanistan Bilateral Security Agreement also will be part of the conversation and the US encourages Kabul to sign it as soon as possible, she noted. -Dawn