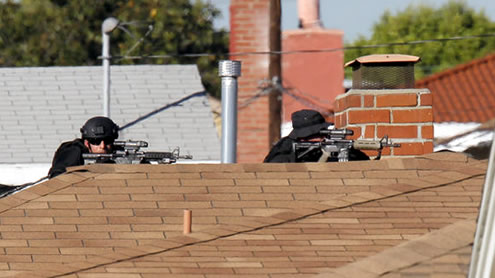 A man shot and wounded a suburban Los Angeles police officer Wednesday and holed up in a home with two hostages, one of whom may be a 14-year-old girl, authorities said.

The Inglewood officer’s protective vest stopped the bullet and he was taken to a hospital in good condition but “in a lot of pain,” Capt. James D. Madia said. The officer was later transferred to another hospital. Reports of a family disturbance sent officers to the home around 12:30 p.m., police said. Some witnesses reported that a 14-year-old girl ran screaming from the home and was dragged back inside.

A man in the home shot at the arriving officers “before they could even get to the front door,” Madia said. Officers returned fire, and a video aired on KABC-TV captured more than a dozen shots being fired. Officers pulled their wounded colleague out of the line of fire, Lt. Oscar Mejia said. Esther Frazier, who lives across the street, said she was baking a cake for Thanksgiving when she heard a commotion and walked outside to see police officers banging on the door of the home.She went back inside to turn off her oven when gunfire erupted.

“There were so many gunshots, oh my God, it was like you were in a war zone,” she told the Los Angeles Times. “A shot came through the screen on my door. “I am scared to death, I’m on my floor in the den,” she said by telephone. After the officer was shot, a policewoman trying to help and shield him fell and was slightly injured. “The female officer began running back down the avenue. She collapsed in front of us … and they slung her over the shoulder like a sack and took her out,” witness Kimberly Edwards told KABC-TV.

The female officer was treated at a hospital and released. Both injured officers have been with the department for at least a decade, Mejia said. It was unclear whether the gunman was wounded. Police from Inglewood and neighboring communities, along with Los Angeles County sheriff’s deputies, swarmed the area and evacuated a block of homes. The gunman apparently had called a police station several times but hung up. Seven hours after the shooting, crisis negotiators at the scene were talking to him sporadically. -Yahoo