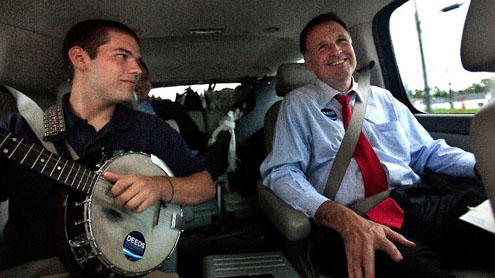 A Virginia state senator was stabbed and seriously wounded at his home on Tuesday, and police said they were investigating whether the senator’s son may have carried out the attack before committing suicide. Creigh Deeds, a 55-year-old Democrat who ran unsuccessfully for governor in 2009, was flown to the University of Virginia Medical Center in Charlottesville with stab wounds to his head and upper body, Virginia State Police spokeswoman Corinne Geller said. His 24-year-old son, Austin “Gus” Deeds, was alive at the home in Millboro, about 100 miles west of Richmond, when police arrived, Geller said, but died at the scene of a gunshot wound.

“We’re still looking into and leaning towards it being an attempted murder-suicide. But at this time, it’s not concrete,” Geller told a televised news conference, adding that police had recovered a firearm. Only Deeds and his son were at the Bath County home at the time of the incident, though the senator’s wife lives there as well, Geller said. After Deeds was stabbed, the senator walked from his home to the street, police said.

A cousin who was driving by saw him, picked him up and took him to the cousin’s home, where they called police. Geller said Deeds was in fair condition and has been able to talk to police, but declined to release details about his statements.

The Richmond Times-Dispatch reported that the son had undergone a mental health evaluation on Monday at Bath Community Hospital but was released. Dennis Cropper, executive director of the Rockbridge County Community Services Board, told the newspaper that an emergency custody order let Deeds be held up to four hours to determine whether he should be kept longer, up to 48 hours, under a temporary detention order.

Cropper said the son was released because no psychiatric bed could be found in the area, the newspaper reported. The Rockbridge agency said in a statement it could not confirm whether anyone had been issued the emergency custody order. Virginia Governor Bob McDonnell, a Republican who defeated Deeds for the state’s top office, offered his condolences and said the state “unites in prayer” for Deeds’s recovery. Deeds was the Democratic nominee for state attorney general in 2005 and governor in 2009, but lost both races. He has been a state senator since 2001.

Born in Richmond, Deeds attended Concord College and Wake Forest University School of Law. He served in the Virginia House of Representatives for nine years until he joined the Senate in 2001, according to his official state website. According to media reports, Gus Deeds, a music major at The College of William & Mary in Williamsburg, Virginia, took a semester off school in 2009 to help his father campaign. Officials at the college said he been enrolled off and on since graduating high school in 2007, but he had withdrawn from the college this semester. -Yahoo