With a new book out, Sarah Palin greets Supporters 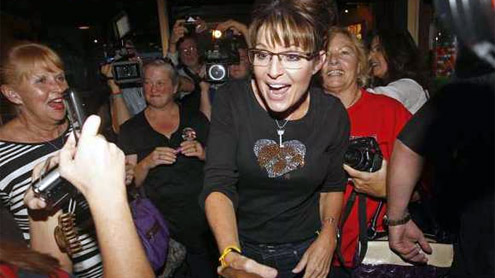 Protecting the Heart of Christmas” on Tuesday in the aptly named town of Bethlehem, where fans braved frosty weather for a glimpse and an autograph. Palin argues in her new book that Christmas, and more broadly religious freedom, is under attack from political correctness, the “sneering media” and as one chapter is entitled, “Angry Atheists with Lawyers.” In eastern Pennsylvania, however, supporters were more interested in meeting Palin, the 2008 Republican vice presidential nominee, than debating religion and secularism.

Hundreds of people lined up to wait in the wintry chill outside the Barnes & Noble, where Palin was autographing copies of her book inside. “Sarah is the attraction because she’s a real person,” said Jaye Meeker, 25, a farrier from Phillipsburg, New Jersey. “She’s a woman first and a politician second. She cares about the little people.” Palin has recently been rallying members of the conservative Tea Party wing of the Republican Party in their failed effort to defund President Barack Obama’s Affordable Care Act, and was critical of party members who agreed to end the government shutdown. “Sarah should have been the president because she is the only one who was qualified,” said retiree Donna Souders, 68, of Plainfield Township, Pennsylvania. “She is a down-to-earth woman.”

Taryn Gilbert, 23, a singer and dancer from nearby Easton, Pennsylvania, said she came to the book-signing because she and Palin share the same values. “I agree with 100 percent of the things she says,” said Gilbert. “I love her.” In the new book, Palin laments such developments as saying “Happy Holidays” instead of “Merry Christmas” and expunging Christmas carols from seasonal pageants. Bethlehem, which calls itself “Christmas City USA,” traditionally goes all out with lavish lighting displays, an open-air holiday market, tourist festivities and a live Advent calendar marking each day leading up to Christmas. Palin’s tour includes stops in the South and Midwest. Her book is published by HarperCollins. -Yahoo