Senate will wait before Moving on Iran Sanctions: aides 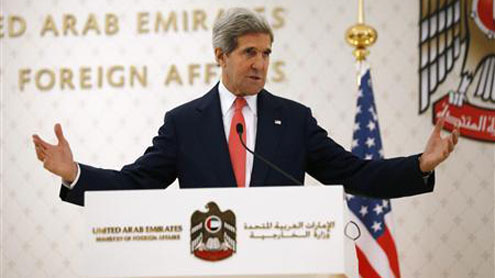 U.S. lawmakers will wait for a briefing by Secretary of State John Kerry this week before deciding whether to impose tough new sanctions on Iran over its nuclear program, Senate aides said on Monday. Kerry is expected to lead the Obama administration’s latest effort to prevent imposition of further punitive measures against Iran even as it faces growing concern on Capitol Hill and from pro-Israel groups that United States may be giving away too much in negotiations with Tehran. The top U.S. diplomat will brief the Senate Banking Committee on Wednesday after the United States and five other world powers failed to clinch a deal with Iran in marathon weekend talks in Geneva aimed at curbing its nuclear program.Senator Tim Johnson, the Senate Banking Committee’s chairman, will not make a decision on how to proceed until after that closed-door meeting, a committee aide said.

But a number of key lawmakers have already weighed in, calling for tighter sanctions following the latest round of negotiations, despite the White House’s insistence that such moves would undermine diplomacy. Talks are set to resume on November 20 in Geneva. Adding to pressure for congressional action, a source at the American Israel Public Affairs Committee, the largest and most influential pro-Israel lobby, said the group “continues to be supportive of Senate efforts to enhance sanctions.” The Anti-Defamation League, a leading American Jewish group, also urged additional measures.The legislative push reflected skepticism in Washington about rapprochement between Iran and world powers and coincided with renewed lobbying by Israel against elements of a proposed deal it sees as leaving open the danger Iran could build a nuclear bomb.

Tehran denies seeking nuclear weapons. “It is our feeling that additional sanctions right now will have the potential to derail the diplomatic agreement and would give Iran the opportunity to actually achieve sanctions relief by dividing the international coalition,” a senior administration official said in a possible preview of the message Kerry will deliver to lawmakers. Sanctions imposed last year by the United States and the European Union have combined to slash Iran’s oil exports by roughly 1 million barrels a day, depriving Tehran of billions of dollars of income and driving up inflation and unemployment.

KERRY TO FACE GRILLING BY LAWMAKERS

Returning from a trip that included visits with Middle East allies and direct participation in the Geneva talks, Kerry can expect to be grilled by lawmakers about the status of negotiations. On the table for a preliminary deal is what Western officials describe as phased, limited and reversible relief from sanctions in return for some restraints on Teheran’s nuclear activities. “Members of the Banking Committee are going to be briefed on the Geneva negotiations by Secretary of State Kerry later this week, and Chairman Johnson will not make a decision on additional sanctions until he has had a chance to consult with his colleagues following the briefing,” a banking committee aide said. Iran says its nuclear program is a peaceful bid to generate electricity.

But its refusal to halt sensitive work has drawn tough sanctions targeting its lifeblood oil exports. A package of tighter sanctions has been making its way through Congress. The Republican-led House of Representatives passed its version of a stiffer sanctions bill in July but was held up in the Democratic-controlled Senate after President Barack Obama’s administration asked the banking committee for a delay to let the delicate diplomatic talks unfold. Members of Congress, often including Obama’s fellow Democrats, generally take a harder line on Iran than the administration. “The attitude is let’s hear him (Kerry) out. After that, unless there is high confidence that we’re going to get the Iranians to agree to something stronger, there’s a good chance we’re going to move forward (on the sanctions bill),” another Senate aide said.

After the weekend talks in Geneva failed to yield an agreement, Israeli Prime Minister Benjamin Netanyahu said he felt the Obama administration was pursuing “a very bad deal” and urged Israel’s U.S. supporters to help him avert it. Abraham Foxman, national director of the Anti-Defamation League, had agreed to hold off on urging new Iran sanctions after he and several other American Jewish leaders met White House officials at the end of October. But Foxman said on Monday that while he gave the administration the “benefit of the doubt” earlier, “We no longer have the luxury or the option to refrain from enacting additional sanctions against Iran.”  -Yahoo