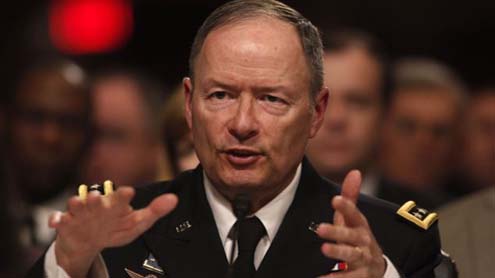 The head of the National Security Agency, Army General Keith Alexander, is defending U.S. surveillance programs amid a wave of outrage across Europe.

Alexander faced a mixed reaction from lawmakers on Capitol Hill at a House hearing Tuesday. The United States is facing a strong backlash from Europe following reports the National Security Agency wiretapped the mobile phone of German Chancellor Angela Merkel. There are also reports in other countries, including France and Spain, that the NSA was collecting the phone data of millions of their citizens. All the reports are based on data leaked by former NSA contractor Edward Snowden. The European Parliament sent a nine-member delegation to Washington to meet with members of Congress as well as U.S. trade and diplomatic officials to vent their anger over U.S. surveillance practices.

European Parliament member Jan Philipp Albrecht told VOA that the reports about the eavesdropping on the German chancellor were the tipping point. “Now people are really concerned.  They see that it is not any longer connected to a terrorist threat, because [Chancellor] Angela Merkel is not a terrorist, or not part of a terrorist ring, and they think that there was a red line crossed, which is now spying on everybody about everything,” said Albrecht. Albrecht called for public debate and for the U.S. Congress to pass legislation to balance national security needs with the responsibility to protect basic civil rights.

European officials say if changes are not made, important trans-Atlantic trade talks will be suspended.On Capitol Hill, the House Permanent Select Committee on Intelligence held an open hearing on possible changes to NSA spying programs. NSA chief Keith Alexander was on the defensive, saying the people at the NSA are proud patriots who work hard to keep the United States and Europe safe from real terrorist threats.But what we do not do is spy unlawfully on Americans, or for that matter, spy indiscriminately on the citizens of any country,” said Alexander.

Asked about eavesdropping on foreign leaders, Alexander said one of the first things he learned in intelligence school is that it is valuable to learn about the intentions of foreign leaders. Alexander also denied the NSA is collecting the phone records of millions of French and Spanish citizens. Republican House Intelligence Committee Chairman Mike Rogers also defended the NSA, saying it is naïve to think that other countries are not conducting their own surveillance programs. He said the NSA and other intelligence agencies had prevented another massive terrorist attack on U.S. soil. m“This is a time for leadership in a very dangerous and chaotic world; this is not a time to apologize,” said Rogers. On the Senate side, Republican Susan Collins took a different stance, telling reporters, “friends do not spy on friends.

“I think that is totally inappropriate. There is absolutely no justification for our country to be collecting intelligence information on the leaders of some of our closest allies,” said Collins. Collins and Democratic Senate Intelligence Committee Chairwoman Dianne Feinstein say it is a big problem if President Barack Obama did not know the top leaders of some of the closest U.S. allies were under surveillance. The White House has said the United States is no longer tapping German Chancellor Merkel’s cell phone and has promised to review NSA programs. -Voanews