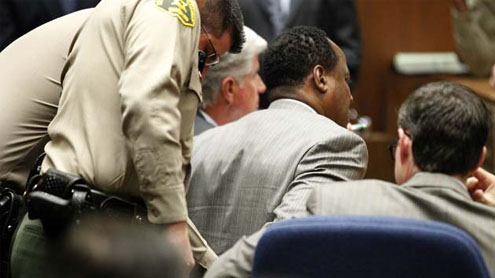 LOS ANGELES (AP) — Michael Jackson’s doctor was convicted Monday of involuntary manslaughter in the pop star’s death for supplying an insomnia-plagued Jackson with a powerful operating-room anesthetic to help him sleep as he rehearsed for his big comeback.
Dr. Conrad Murray sat stone-faced, his chin held high, as he heard the verdict that could send him to prison for up to four years and cost him his license to practice medicine. He was handcuffed and immediately led off to jail without bail to await sentencing Nov. 29.
The verdict marked the latest chapter in one of pop culture’s most shocking tragedies — the 2009 drug-overdose death of the King of Pop at age 50 as he was about to mount a series of heavily promoted concerts in London that he hoped would turn his career around after a slide prompted by child-molestation allegations and years of bizarre behavior.
A shriek broke the silence in the packed courtroom when the jury’s decision was read, and the crowd outside the courthouse erupted in cheers. Jubilant Jackson fans sang “Beat It” and held signs that read “Guilty” and “Killer.” Drivers honked their horns.
Members of Jackson’s family wept, and his mother, Katherine Jackson, said, “I feel better now.” His sister La Toya said she was overjoyed and added: “Michael was looking over us.”
Members of the jury were escorted from the building and not available for comment.
Defense attorney Ed Chernoff said later in the day the verdict was a disappointment and would be appealed. Asked how Murray took the verdict, Chernoff said, “he’s a pretty strong guy.”
Regarding Murray’s future, he said, “the keys to his handcuffs belong to the judge. We certainly would like to do anything we can to keep him from going to prison.” The jury deliberated less than nine hours after a six-week trial that depicted Jackson as a tormented genius on the brink of what might have been his greatest triumph but for one impediment — extreme insomnia.
Jackson’s death marked the end of an incredible rise to fame from his humble beginnings in Gary, Ind. The tiny powerhouse singer and dancer with the magnetic smile enchanted audiences and elevated the Jackson Five to the top of the pop music world.
As a solo adult act, the self-anointed King of Pop sold out concerts and topped the recording charts with albums such as 1982’s “Thriller,” which remains the biggest-selling album of all time, with more than 100 million copies sold worldwide.
His public life, however, eventually became a surreal depiction of the toll of celebrity. He went on wild spending sprees, married and divorced Lisa Marie Presley and Debbie Rowe, and had three children who were kept disguised in masks because he feared their kidnapping. When he was tried and acquitted of child molestation in 2005, Jackson appeared to fall apart, moving to the Middle East and other countries in search of a new life. The comeback concerts in London were his chance for redemption. Mindful of the physical requirements, he hired Murray as his private doctor.
Prosecutors portrayed the 58-year-old Murray as an incompetent doctor who administered propofol — an extremely potent anesthetic normally used during surgery — in Jackson’s bedroom without adequate safeguards and botched his care when things went wrong – YahooNews
Previous Post