Obama to ’85 Bears: Most fun he’s had as president 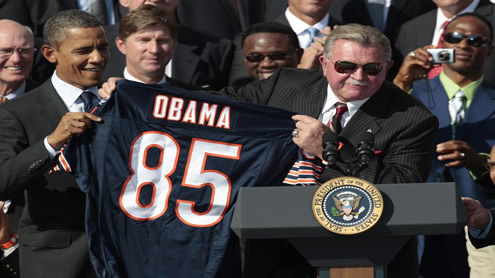 “This is much fun as I will have as president of the United States, right here,” Obama said in welcoming the 1985 Chicago Bears to the White House Rose Garden. “This is one of the perks of the job, right here.”

An admittedly biased resident of Chicago, Obama declared the Bears “the greatest team in NFL (National Football League) history,” though he admitted “that may get me in some trouble in some of the cities that I visit. But I believe it is the truth.”

Those might include San Francisco, where the 49ers won four Super Bowls in 1980s; Dallas, whose Cowboys won three Super Bowl in the 1990s; and Boston, which rooted the New England Patriots to three titles in the ’00s.

The Bears won just a single Super Bowl, capping their 1985 season with a blowout win over New England on Jan. 26, 1986. The Bears’ scheduled White House appearance with President Ronald Reagan was scrubbed because of the explosion of the space shuttle Challenger.

According to Obama, an official with National Football League called the current White House for a belated re-schedule when it realized a big Bears fan lived there.

CAPTION
By Pablo Martinez Monsivais, AP
The president did make a strong case for the Bears’ place in history. The team won 18 of 19 games that amazing season, paced by the late Walter Payton at running back and a stingy defense whose tactics revolutionized the way the pro game is played.

Obama also cited the characters that made the ’85 Bears so memorable.

When he talked about how outspoken quarterback Jim McMahon didn’t live by many rules, McMahon — wearing his trademark headband — yelled out, “do you need me to speak?”

“No, we’re not going to let Jim have the mike,” Obama said. “I’m just going to say nice things about you.”

The team also recorded a song during their championship season, The Super Bowl Shuffle, which also won presidential praise.

“I think it’s safe to say that this is the only team in NFL history with a gold record and a Grammy nomination,” Obama said.

CAPTION
By Charles Dharapak, AP
Obama even gave a shout-out to Dan Hampton, one ’85 Bear who declined to attend the White House event because he said he wasn’t a fan of the president. Otis Wilson, who was part of the Bears brutal linebacker corps, told reporters after the ceremony he couldn’t imagine missing the event.

“You’ve got a lot of guys who couldn’t be here, because they had to work,” Wilson said. “Listening to the media, you heard a certain individual saying he didn’t want