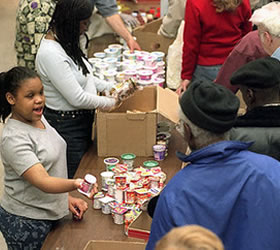 WASHINGTON: The ranks of the working-age poor climbed to the highest level since the 1960s as the recession threw millions of people out of work last year, leaving one in seven Americans in poverty.

The overall poverty rate climbed to 14.3 percent, or 43.6 million people, the Census Bureau said on Thursday in its annual report on the economic well-being of U.S. households. The report covers 2009, President Barack Obama’s first year in office.

The poverty rate climbed from 13.2 percent, or 39.8 million people, in 2008.
The share of Americans without health coverage rose from 15.4 percent to 16.7 percent — or 50.7 million people — mostly because of the loss of employer-provided health insurance during the recession. Congress passed a health overhaul this year to address rising numbers of the uninsured, but the main provisions will not take effect until 2014.

The new figures come at a politically sensitive time, just weeks before the Nov. 2 congressional elections, when voters restive about high unemployment and the slow pace of economic improvement will decide whether to keep Democrats in power or turn to Republicans.

The 14.3 percent poverty rate, which covers all ages, was the highest since 1994. Still, it was lower than estimates of many demographers who were bracing for a record gain based on last year’s skyrocketing unemployment. Many had predicted a range of 14.7 percent to 15 percent.

Analysts credited in part increases in Social Security payments in 2009 as well as federal expansions of unemployment insurance, which rose substantially in 2009 under the economic stimulus program. With the additional unemployment benefits, workers were eligible for extensions that gave them up to 99 weeks of payments after a layoff.

Another likely factor was a record number of working mothers, who helped households by bringing home paychecks after the recession took the jobs of a disproportionately high number of men.

“Given all the unemployment we saw, it’s the government safety net that’s keeping people above the poverty line,” said Douglas Besharov, a University of Maryland public policy professor and former scholar at the conservative American Enterprise Institute.

Among the working-age population, ages 18 to 65, poverty rose from 11.7 percent to 12.9 percent. That puts it at the highest since the 1960s, when the government launched a war on poverty that expanded the federal role in social welfare programs from education to health care.

In 2009, the poverty level stood at $21,954 for a family of four, based on an official government calculation that includes only cash income before tax deductions. It excludes capital gains or accumulated wealth, such as home ownership.

As a result, the official poverty rate takes into account the effects of some stimulus programs in 2009, such as unemployment benefits as well as jobs that were created or saved by government spending. But it does not factor in non cash government aid such as tax credits and food stamps, which have surged to record levels in recent months. Experts say such noncash aid tends to have a larger effect on lowering child poverty.

Beginning next year, the government plans to publish new, supplemental poverty figures that are expected to show even higher numbers of people in poverty than previously known. The figures will incorporate rising costs of medical care, transportation and child care, a change analysts believe will add to the ranks of both seniors and working-age people in poverty. – Indiatimes