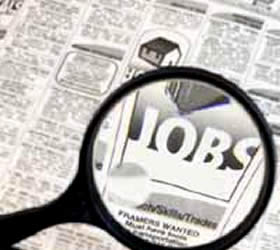 With thousands of young college graduates moving in with parents and returning Iraq-war veterans facing long-term unemployment, President Barack Obama is scrambling for cover. Irresponsible spending, largesse for big banks and subsidies for a broken healthcare system have busted the budget and failed to create jobs.

Economists expect the US Labor Department to report on Friday that the economy lost another 80,000 jobs in August after shedding 131,000 in July.

Completion of the Census accounts for most of the loss, but the report will demonstrate that rewarding Democratic Party academics with new high-paying regulatory jobs and general hostility toward business is causing America’s largest enterprises to head for China and small businesses to whither and die.

The unemployment rate will likely creep up a bit closer to 10%, as more and more Americans drain their retirement accounts and endure the frustration of slammed doors in Barack Obama’s jobs market.

In July alone, 381,000 adults chose to quit looking for work altogether and that trend will continue in Obama’s land of dashed dreams and squandered opportunities.

Economists expect the private sector added about 100,000 jobs in August, but that is an abysmal performance 14 months into a recovery from a deep recession.

The economy must add 13 million private sector jobs by the end of 2013 to bring unemployment down to 6%. Obama’s policies are not creating conditions for businesses to hire those 320,000 workers each month, net of layoffs.

Net of inventory adjustments, the economy’s demand for goods and services is growing at only about 1% a year. The real potential is about 5%, but with economic policies so ill-conceived and with a president so ambivalent about private enterprises – other than those run by Wall Street barons, Hollywood producers and union bosses – that simply is not possible.

In the second quarter, consumer spending, investment in new structures, equipment and software, and government purchases added 4.4% to demand – but as imports grew much more rapidly than exports, the trade deficit tapped off 3.4%. The difference, 1% , is annual growth in demand for US-made goods and services. That has been the pace since the recovery began in July 2009.

Businesses can accommodate up to 2% growth in demand just by improving productivity and not adding workers. Unless the rapid growth in imports can be curbed, the US economy is headed for very slow growth and rising unemployment.

The president’s economic policies – more spending, taxes and regulation for Americans and appeasing foreign mercantilists like China – is simply not working.

[The Obama administration this week rejected a plea from US manufacturers to increase duties on imports from China to compensate for the effects of a weak yuan. The Commerce Department rejected arguments by makers of aluminum and glossy paper that an undervalued currency acts as a subsidy for Chinese producers, letting them undercut their American competitors. International Monetary Fund economists say the yuan is “substantially undervalued” against the dollar but do not cite any particular levels, AFP reported.]

The massive permanent expansion in federal spending and regulatory oversight built into Obama’s budget is discouraging private hiring by raising fears of even higher taxes and yet more intrusive regulation.

Simply, higher taxes discourage purchases of non-essentials and high-line durable goods, like better appliances, more appointed automobiles and higher-quality homes, and higher taxes and tougher regulation increase incentives to offshore production to China and other locations where those burdens are less and entrepreneurship is more welcome.

Prior to the 2008 crisis, president George W Bush spent 19.6% of gross domestic product (GDP) and the deficit was $161 billion; two years into the economic recovery in 2011, Obama’s budget projects outlays at 25.1% of GDP and a $1.3 trillion deficit in 2011. The latter figures are like to be closer to 27% and close to $2 trillion if the president does not accomplish the 4% growth his budgets assume in stark contrast to the real world the rest of us struggle.

Too much spending will require new taxes, and not just pushing rates marginally above 50% on families earning $250,000. Higher rates for those families will raise taxes on half the income earned by proprietorships – those small and medium-sized businesses the president is urging to create jobs.

Much of the stimulus money was squandered on political hobby-horses that create few jobs. For example, grants to build green buildings displace other, more cost-effective private construction and don’t increase the amount of commercial space rented or built over the next several years. By delaying projects, those grants have slowed construction spending and killed jobs.

The biggest banks received more than $2 trillion in Troubled Asset Relief Program funds and Federal Reserve assistance to clean up their balance sheets and recapitalize securities trading, while the 8,000 regional banks got little assistance and remain burdened by toxic real-estate loans. Consequently, nearly 250 regional banks have failed, and small and medium-sized businesses cannot get credit to expand.

In addition to credit, businesses need more customers to create jobs, and the trade deficit – in particular, imports of oil and the imbalance with China – cut a huge hole in demand for US goods and services. Without addressing oil and China, other efforts to create jobs are futile.

The president’s moratorium on deep water drilling, though popular with environmental fundamentalists, kills jobs by laying off workers in the oil, gas and supporting industries and by sending too many consumer dollars abroad that could be spent here.

Detroit has the technology to build much more efficient gasoline-powered vehicles now, and a shift in national policy to rapidly build these would reduce oil imports and create many jobs. Instead, the president proposes to replace stickers on cars that report gas mileage intelligent folks can understand with grade school letters – A, B, C …

If we could only have those letter grades for the president’s economic appointees, we might be better off

China’s undervalued currency makes its products artificially cheap and deceivingly competitive on US store shelves, but Beijing’s promises of new flexibility on the yuan have not translated into meaningful revaluation.

[China’s yuan fell to its lowest level against the U.S. dollar in more than two months on Tuesday after the central bank fixed the dollar-yuan central parity rate at a 10-week high, Dow Jones reported.]

If Obama wants to fix the federal deficit and create jobs, perhaps he should spend less, get serious about better using and developing American energy resources and quit appeasing China.

Candidate Obama promised those things but President Obama’s memory seems short on everything but the failings of presidents passed. -atimes