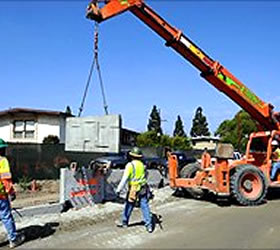 President Barack Obama has called for a new comprehensive infrastructure plan as part of efforts to jump-start the spluttering US economy.

The plan will invest about $50bn (£32.5bn) in roads, railways and airports as well as high-speed rail and the creation of an infrastructure bank.

US infrastructure has long been considered underfunded and receives poor grades from government agencies. The move comes amid signs that the US economy is faltering.

On Friday, the US Labor Department announced that the US economy had lost a further 54,000 jobs, while the unemployment rate rose to 9.6%, from 9.5% in July.

“Over the next six years, we are going to rebuild 150,000 miles of our roads – enough to circle the world six times,” Mr Obama told an event in Milwaukee marking the Labor Day holiday in the US.

“We’re going to lay and maintain 4,000 miles of our railways – enough to stretch coast-to-coast. We’re going to restore 150 miles of runways and advance a next generation air-traffic control system to reduce travel time and delays for American travellers – something I think folks across the political spectrum could agree on.”

“All of this will not only create jobs now, but will make our economy run better over the long haul,” Mr Obama add.

The proposals would require congressional approval, which analysts say, is uncertain amid concerns about the size of the federal deficit.

Senate Republican Leader Mitch McConnell said the plan “should be met with justifiable scepticism” because it would raise taxes.

The infrastructure announcement marks the start of a week in which Mr Obama will focus on the economy, seen as the most important issue for voters in Novembers congressional elections.

On Wednesday the president travels to Cleveland, Ohio, where he is expected to unveil new tax proposals. On Friday he will speak in Washington.

His message in the next two months, and more importantly the next two years, will be “the Republicans robbed us of recovery”, our correspondent adds.
US road construction US infrastructure has been roundly criticised

A CNN/Opinion Research Corporation poll of 1,024 US adults released on Monday suggests 52% of people would vote Republican, against 45% for the Democrats, up by 4% on last month.

The proposals call for investments over six years, but would be backed by an initial $50bn.

Reports quoting White House officials suggest the administration would consider closing tax breaks for oil and gas companies to pay for the plans.

In 2009, a report from the country’s top civil engineers found that the state of America’s infrastructure had not improved in the past four years.

The “Report Card” from the American Society of Civil Engineers gave the US a D grade for its roads, public transport and other basic services, saying an estimated $2.2tn (£1.5tn) was needed for repairs.

“In 2009, all signs point to an infrastructure that is poorly maintained, unable to meet current and future demands, and in some cases, unsafe,” the report said. -BBC