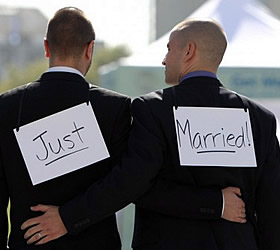 A total of 398 marriages have been registered, of which 53 percent were between men and 47 percent between women, the government of the Mexican capital said on Monday.

In these six months, 41 foreigners have joined the Mexicans – mostly Europeans, followed by South Americans, and citizens of other North American countries.

Most of those who got married are between 30 and 40 years of age. There have been four weddings for couples between the age group of 71 and 90.

The Supreme Court has ruled that it is possible for same-sex married couples to adopt children.

The law has been slammed by the church, which has harshly condemned both same-sex marriages and the possibility that they adopt children. -timesofindia