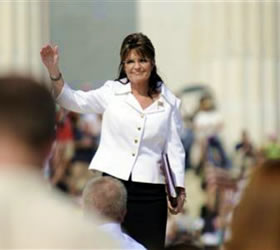 Tens of thousands of Americans rallied in front of the Lincoln Memorial on Saturday to hear speeches about God and country in a conservative show of strength ahead of congressional elections this fall.

Many were members of the Tea Party, a loosely organized grassroots movement driven by conservative activists seeking lower taxes and more limited government.

Republicans hope to harness their anti-establishment fervor to win control of Congress from President Barack Obama’s Democrats in November. But Tea Party adherents have also forced mainstream Republican candidates to tack to the right.

Beck and the Republican 2008 vice presidential candidate Sarah Palin, both darlings of the Tea Party, urged a return to what they said were traditional American values of service to others and a belief in God.

“Something beyond imagination is happening,” Beck declared. “America today begins to turn back to God.”

Much of the rally was devoted to paying tribute to the U.S. military, including wounded veterans of wars in Iraq and Afghanistan. Although both Palin and Beck are strong critics of the Obama administration’s policies, they eschewed overtly political references, while expressing the desire for change.

“May this day be the change point,” Palin said to applause from listeners, many of whom were waving American flags. “Look around you; you are not alone. You are Americans!”

The rally was criticized by some civil rights leaders for being held on the same day and in the same place that Martin Luther King, Jr. gave his “I Have a Dream” speech 47 years ago.

Beck says the event was scheduled on that date by coincidence. But both he and Palin paid tribute to King, and giant TV screens on the Mall in front of the Lincoln Memorial played newsreel footage of King’s 1963 speech.

“You have the same steel spine and moral courage as Washington and Lincoln and Martin Luther King,” Palin told the crowd.

“It is in you. It will sustain you, as it sustained them. So with pride in the red, white and blue, with gratitude to our men and women in uniform, let’s stand together, let’s stand with honor, let’s restore America.”

King’s niece, Alveda, also addressed the overwhelmingly white audience, telling them that the United States was still suffering “from the great evil divide of racism”.

She said she believed her “Uncle Martin” would have been pleased to see them honoring soldiers and people doing charitable work. Among the honorees in the latter category was Albert Pujols, baseball player for the St. Louis Cardinals.

A competing march to celebrate King’s legacy was organized by black leaders including Al Sharpton, who said Beck was distorting the slain civil rights leader’s message.

Under the banner, “Reclaim the Dream,” the group marched to the site of a memorial to King that is under construction and gave speeches there.

D.C. police said they did not have a crowd estimate for either event.

Back at Glenn Beck’s rally, some attendees stressed that they were not part of the Tea Party movement, but shared many of its concerns. They complained about mounting U.S. debt, the “arrogance” of U.S. leaders and what they saw as a “socialist” agenda among Obama’s Democrats.

“Everything they want to do is socialistic,” said Dana Gowen, 65, of Orlando, Florida. He was carrying a sign that said: “Are we really 1.4 trillion in debt?”