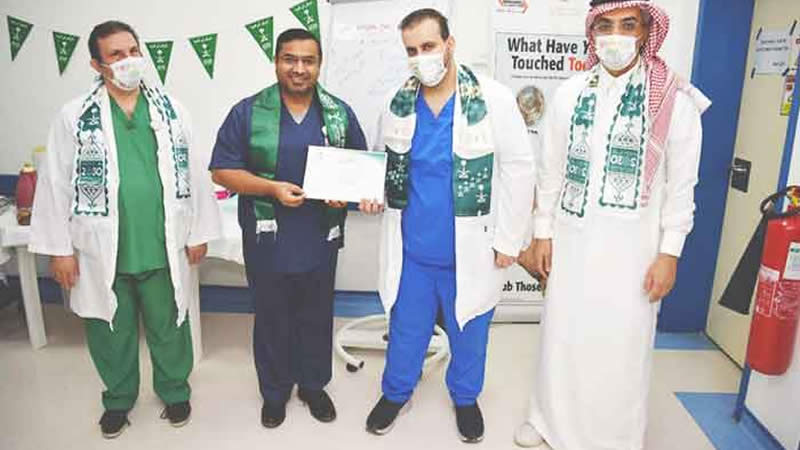 A Pakistani doctor has won the praise of Saudi Arabia after he successfully led fight against Covid-19 pandemic and lowered the fatality rate in the kingdom during virus upsurge.

“In recognition of my services as head of the Intensive Care Unit (ICU) at the King Salman Hospital, I was given a leadership award and an appreciation certificate by the Saudi health ministry,” Dr Shahzad Ahmad Mumtaz told Arab News during a telephone interview from Riyadh on Saturday.

He was presented with the award during a ceremony to mark Saudi National Day on Sept 23.

Hailing from Layyah, a small city in southern Punjab, Mumtaz has been working in Saudi Arabia for the last 18 years.

“At the outset of the pandemic, the Covid-19 mortality rate was very high at the King Salman Hospital. That is the reason why I was brought here as the ICU head — to increase the hospital’s capacity to deal with the challenges posed by the pandemic,” he said.

Mumtaz said that he succeeded in bringing down these deaths by 10 per cent during the last five months, due to better team management and greater use of modern techniques and technology.

“The mortality rate related to Covid-19 in international ICUs is around 30 per cent, since very critical patients are shifted to these units. The ICU at the King Salman Hospital has remained under 10 per cent during the last five months,” he said.

“During all this time, I have not taken a single leave and have worked for 18-20 hours a day,” he continued.

“After joining, I immediately expanded the ICU from 14 to 60 beds. We used the helmet technology that is mostly preferred in Spain and Continuous Positive Airway Pressure, which is recommended by Americans. They both produced impressive results in our hospital during the pandemic,” he said.

In June, another Pakistani doctor Naeem Chaudhry became the first in the Kingdom who laid down his life while fighting novel coronavirus disease.

He worked in the General Surgery Department at Hira General Hospital in Makkah.

The country has recorded a significant drop in Covid-19 cases and related deaths in the last few days. The total number of recoveries in Saudi Arabia increased to 315,636 after 843 more patients recently recovered from the virus.

Meanwhile, 4,625 people have succumbed to the virus in the kingdom so far.