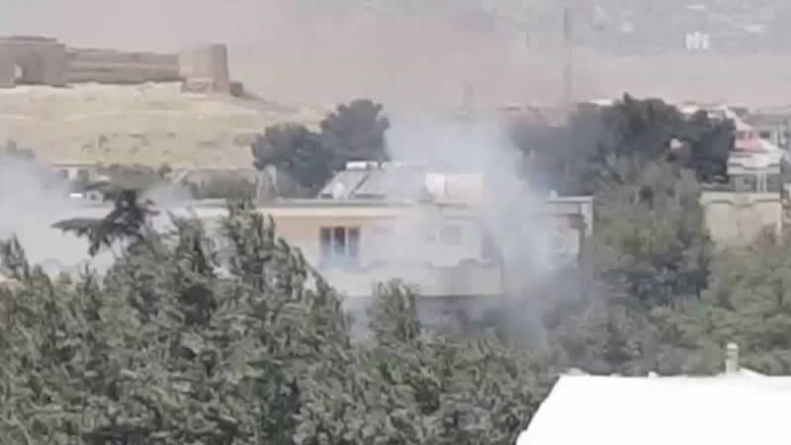 A suicide bomber blew himself up outside the Iraqi embassy in Kabul Monday and militants breached the compound, Afghan officials said, in an unfolding attack claimed by the Islamic State group.

Three of the attackers were still loose in the compound, but all embassy staff had been swiftly evacuated as security forces rushed to the scene, Afghanistan’s interior ministry said in a statement. Black smoke billowed into the air above the neighbourhood in northwestern Kabul as the sound of ambulance sirens could be heard. The interior ministry confirmed that at least four militants had attacked the Iraqi embassy, saying that a suicide bomber had detonated his vest at the compound entrance.

“Police reacted quickly and the embassy staff are shifted to a safe location. The operation to kill all terrorists is ongoing,” the statement continued. There was no immediate information about casualties. Two members of “the Islamic State attack the Iraqi embassy building in the Afghan city of Kabul”, said the jihadist group’s propaganda agency Amaq without providing further details. The embassy is located in northwestern Kabul, in a neighbourhood that is home to several hotels and banks as well as large supermarkets and several police compounds.

“I heard a big blast followed by several explosions and small gunfire,” said Ahmad Ali, a nearby shopkeeper. People were worried and closed their shops to run for safety. The roads are still blocked by security forces.” The attack is the latest to rock Kabul, which is regularly devastated by bomb blasts and militant assaults, often killing many civilians. The resurgent Taliban claim many of the attacks as they step up their bid to drive out foreign forces with a series of assaults across the country.

But the Islamic State group, recently ousted from the Iraqi city of Mosul, have been expanding their footprint in eastern Afghanistan and have claimed responsibility for several devastating attacks in Kabul. First emerging in 2015, the group’s local affiliate Islamic State Khorasan Province (IS-K), overran large parts of eastern Nangarhar and Kunar provinces where they have engaged in a turf war with the Taliban. US forces in Afghanistan have repeatedly targeted the group, killing its head Abu Sayed and several senior advisers in a July 11 strike in Kunar, the Pentagon has said.

The decision to deploy the so-called Mother Of All Bombs (MOAB) also targeted IS hideouts in Nangarhar, according to the Afghan defence ministry, though fighting in the area has continued. Pentagon officials say the group now numbers fewer than 1,000 in Afghanistan. We will be relentless in our campaign against ISIS-K. There are no safe havens in Afghanistan,” said General John Nicholson, commander of US forces in Afghanistan, in a statement Sunday confirming some of the deaths in the July 11 strike.

“We will hunt them down until they are no longer a threat to the Afghan people and the region,” he said. The group is believed to be on the back foot in the Middle East, where analysts have said it has lost more than 60 percent of its territory and 80 percent of its revenue, three years after declaring its self-styled “caliphate” across swathes of Iraq and Syria. NATO forces ended their combat mission in Afghanistan at the end of 2014. Since then Afghan troops and police, beset by soaring casualties, have struggled to beat back the insurgents. The US is considering whether to send thousands more troops to help the beleaguered Afghan forces as the war-weary country is gripped by increasing insecurity.