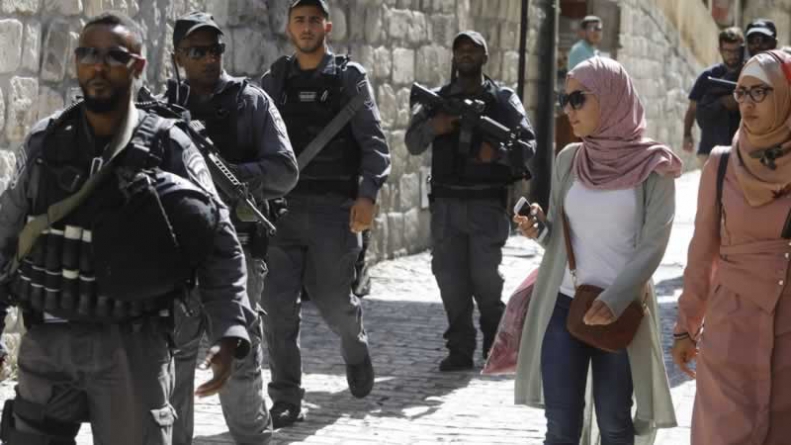 Al-Aqsa mosque officials have rejected new security measures put in place by Israel as it reopened the holy site following a deadly gun battle that prompted a two-day closure.

Muslim religious authorities, who administer the compound, are refusing to pray there on Sunday after Israeli authorities installed metal detectors and additional close-circuit television cameras. The closure of al-Aqsa Mosque compound, the occupation in itself and the prevention of the call for prayers are all unfair and unjust and constitute a violation to the United Nations resolutions and the international agreements,” Omar Kiswani, director of al-Aqsa mosque, told reporters outside the site.

“We hold the Israeli government responsible for the changes they have made in the al-Aqsa Mosque and taking its control away from us. We will stay outside the mosque until we get back the way it was taken from us.” Dozens of worshippers gathered to pray at an entrance to the compound next to the Lions’ Gate entry to the Old City, as Israeli security officials look on. Some women wailed and cried, calling on worshippers not to enter. At least two people were reportedly detained after confrontations with Israeli forces, according to reports.

The site was shut down during Friday prayers when five people were killed in a shootout – the first time the compound had been closed for prayers in 48 years. What happened does not justify this,” Abu Mohammed, who works at a small medical clinic inside the compound, told Al Jazeera. “This is our mosque and we refuse to enter through any electronic gate, this can never be imposed on us.”

Israeli Prime Minister Benjamin Netanyahu announced the additional security measures on Saturday, saying they gave Israel “almost complete control over what goes on” in the compound, to prevent future attacks. Earlier in the day, Kiswani told Voice of Palestine radio station the additional security measures were part of a “dangerous and unprecedented move” by Israeli authorities “to impose control over al-Aqsa Mosque”.

Israel’s unilateral decision also triggered anger from authorities in Jordan, the custodian of the holy site. The Jordanian goverment released a statement on Friday demanding Israel immediately open the mosque and warning against steps that could “change the historic status quo in Jerusalem and the mosque”. Proposals to change security measures at the compound have sparked controversy in the past. Palestinians have long feared what they see as Israeli moves to change the status quo at the holy site.

Al Jazeera’s Harry Fawcett, reporting from East Jerusalem, said that “as far as worshippers are concerned, this is an imposition of Israeli sovereignty on an area, which there should be none, and they are opposing this very strongly”.

Daoud Kuttab, columnist at Al Monitor, told Al Jazeera that he expects the tensions to escalate. This is a very worrisome change,” Kuttab said of Israel’s decision not to consult Jordanian authorities of its decision to impose new security measures.

“It sounds like it is going to be troublesome for the days to come,” he said. “Those who killed the soldiers are not from the West Bank or Jerusalem. They came from Israel. They are Israeli citizens. Palestinians are being punished for what Israeli Palestinian citizens of Israel have done.” Daniel Levy, a former Israeli negotiator, told Al Jazeera the attacks are “unacceptable”, but Israel’s unilateral response is only “exacerbating” the situation.

“But what are you doing with regards to the broader conflict that leads to this situation in the first place,” he asked. “In that respect, what we have is a situation, where for good reason neither the Palestinians or the Jordanians have faith in the Israeli side.” After Israel occupied East Jerusalem in 1967, Israeli authorities have maintained an agreement with the Islamic Endowment that runs the mosque compound. Non-Muslims are allowed to visit the site, but are not allowed to pray. The mosque compound is known to Muslims as al-Haram al-Sharif while Jews call it Temple Mount.