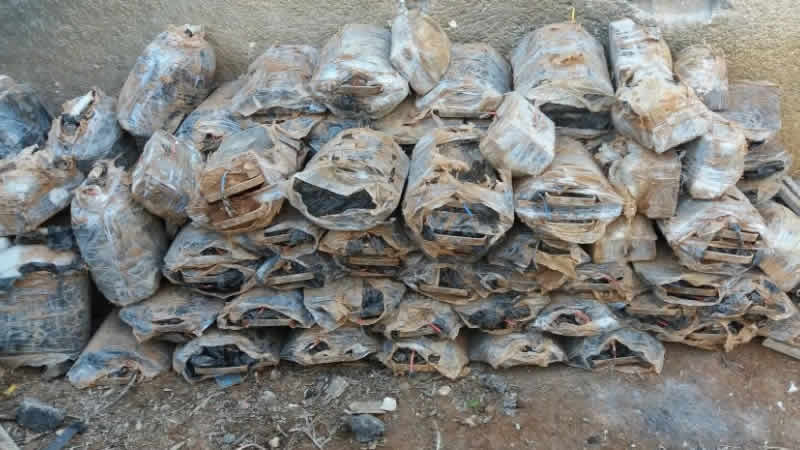 When Hassan Hejazi went to visit his olive grove near the village of Hor Kilis close to the Syrian-Turkish border in Aleppo province, he found what he thought were some unexploded shells.

It was November 2015, and armed opposition factions had just pushed fighters with the Islamic State of Iraq and the Levant group (ISIL, also known as ISIS) out of the area.

Hejazi started moving the shells carefully to clear the grove. As he walked between the olive trees, he stepped on what looked like a thin sheet of metal, inadvertently activating an improvised explosive device (IED). He cannot remember what happened afterwards. A few days later, he awoke in hospital with broken bones and injuries all over his body. He could not see anything. It took him six months to recover partial eyesight in his right eye. The 29-year-old father of three says he can no longer do manual work. Hejazi is one of many victims of ISIL’s lethal tactics of setting up IEDs and booby traps in civilian areas before withdrawing. A team of volunteers clearing out mines and unexploded ordnance from civilian areas later told him that they had removed hundreds of IEDs from the olive grove. This is a very long-lasting problem. Displaced people [are at a risk] of dying or being maimed when they go back home,” Damien Spleeters, head of operations for Iraq at Conflict Armament Research, told Al Jazeera. Although other groups involved in the conflict use IEDs as well, the scale with which ISIL uses them is unmatched, he said, noting that ISIL targets not only enemy combatants, but also civilians, setting up IEDs everywhere from farm fields to homes.

While no organisation has estimated how many of the more than 470,000 deaths in Syria are due to IEDs, the United Nations Mine Action Service identifies them as a “grave threat to civilians”. According to its surveys, some 6.3 million Syrians are living in areas affected by explosive weapons incidents. Adnan al-Hassan was only 20 years old when he started learning about de-mining. His family used to own small shops for electric household items in Raqqa and Aleppo, but the aggressive expansion of ISIL forced them back to their hometown of Azaz in northern Aleppo province. There, he connected with friends who had taken on the risky job of clearing IEDs and unexploded ordnance in civilian areas. Just two months after he volunteered with his friends, Hassan was badly hurt by an IED near the village of Turkman Bareh, some 30km east of his hometown, which ISIL had mined before leaving. His team rushed him to a field clinic and then transferred him to Turkey, where he stayed in hospital for a month and a half until his body started to heal from all the injuries and broken bones. He never completely recovered his vision after losing sight in his left eye. But the injuries he suffered did not dissuade him from continuing his work.

After what happened, we were even more encouraged to continue. We saw that the work is dangerous, but we also saw that it is very important as it benefits our people,” Hassan told Al Jazeera. His team has lost five people in the past two years, amid ISIL’s ever-changing tactics in setting up IEDs and a scarcity of resources, which has affected training and team discipline. To try to become more effective at their work and provide safety for the team, Hassan and the 50 other volunteers working with him decided to found an organisation, the Syrian Mine Action Centre (SMAC). We receive reports from civilians, from local councils, the governorate councils, the stabilisation committee, the White Helmets. All complaints and reports that come in are marked on a map,” Ahmad Naseef, a manager at SMAC, told . Their work is very challenging because of the unconventional nature of ISIL’s tactics, he said. In a conventional conflict, a warring faction would use standard mines and keep maps of the areas it mines, but ISIL does neither. SMAC’s team was one of the first civilian organisations to enter Al Bab after Operation Euphrates Shield forces expelled ISIL from the city. By our initial estimates, around 15,000 IEDs were planted in Al Bab,” Ghiyath Dek, a member of SMAC’s team in Al Bab, told.

His team has started clearing the main streets of the city, after which they will move on to public buildings, private houses and finally, the agricultural land around the city. Dek estimates that it will take up to two months to clear the city of IEDs. The most dangerous kind, he says, are those disguised as rocks or bricks. They are usually left in front of houses or near household items and get activated when someone tries to lift them to clear the way. The SMAC team uncovered a workshop where these IEDs were being prepared using cement and other building materials to mask the explosives. Spleeters noted that ISIL specialises in making IEDs from scratch, unlike other armed groups that use repurposed munitions, and they produce on an “industrial scale”, with workshops specialised at making each element of the device. According to Spleeters, it is not uncommon for ISIL to change the way it sets up IEDs to make it more difficult for de-miners to disable them. They would target de-miners by setting up something that is called an anti-lift device.

If you think you’ve rendered safe a device and then you would lift it, that would detonate the device,” he explained. What has allowed ISIL to gain such sophistication in producing IEDs and munitions has been the decades-long experience of other insurgencies. A specific type of IED switch used in Syria or Iraq was first detected in Afghanistan, while another local switch has been transferred to countries such as Libya, Spleeters said. There is a migration of knowledge, for sure,” he said. ISIL’s sophistication in producing IEDs has ensured that its lethal legacy remains long after its fighters have withdrawn from an area. In Al Bab, ISIL’s IEDs have already claimed four lives, including two civilians. For now, SMAC’s team is warning people against going back home until their work is finished. -aljazeera

10 Beautiful Photos You Won't Believe Were Taken In Pakistan