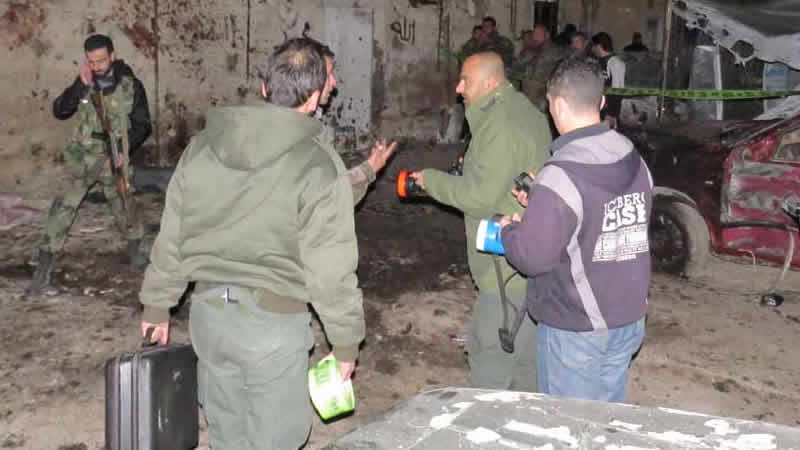 Suicide bomb blast kills at least eight people in southwest district of the Syrian capital, according to monitor group.

At least eight people have been killed in a suicide bomb attack in the Syrian capital, Damascus, according to a monitoring group. The blast late on Thursday went off in a Damascus district close to key intelligence and military bases, the Syrian Observatory for Human Rights, a UK-based group tracking developments in Syria’s conflict through a network of contacts on the ground, said. Eight people died when a suicide bomber targeted Kafr Sousa” in the southwest of the capital, the group said. State news agency SANA said at least seven people were killed when a “suicide terrorist” detonated an explosive belt close to a sports club there. Part of Kafr Sousa is a restricted zone that is home to ministers, senior security officials and intelligence headquarters, but the explosion happened away from that area.

Such attacks are rare in Damascus, a stronghold of the government of President Bashar al-Assad which has been fighting rebels in Syria for nearly six years. The Syrian capital is sometimes the target of shelling by the opposition forces who hold areas on the outskirts. On December 16, a seven-year-old girl wearing an explosive belt blew herself up outside a police station in Midan district, wounding three police officers. Two blasts near state security agencies in Kafr Sousa in December 2011 killed more than 40 people and wounded more than 150, the Syrian government said at the time.

The Syrian conflict started as a largely unarmed uprising against Assad’s rule in March 2011, but it has since escalated into a full-scale civil war that has killed hundreds of thousands and left more than half of the country’s prewar population displaced. New peace talks in the Kazakh capital Astana, which Russia confirmed on Wednesday, are expected to begin on January 23. A Russian diplomatic source said on Wednesday that the talks would be held between the government and rebels only, with the political opposition excluded for the first time. And while the truce has brought quiet to large parts of Syria, sporadic violence has continued elsewhere, with Turkey and the rebels warning that the ongoing fighting could jeopardise the Astana talks. On Wednesday, the Syrian Observatory reported government air strikes in several parts of the Eastern Ghouta region outside Damascus that killed one person and wounded nine.

HighStreet All Set To Exhibit In Lahore