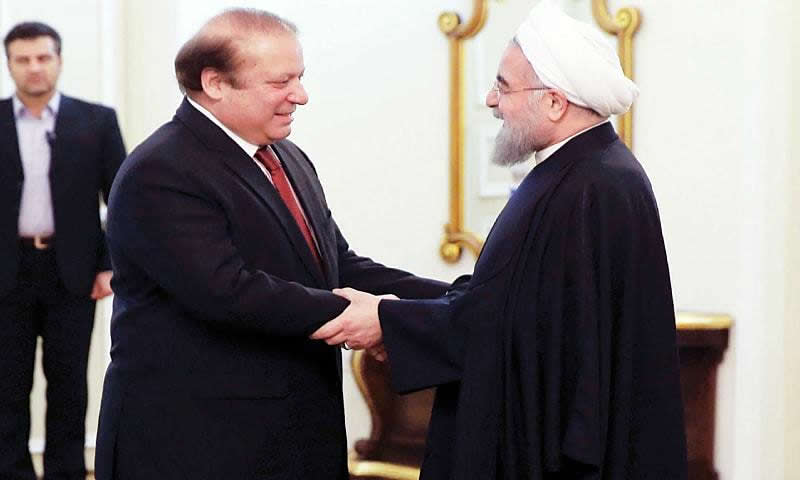 Prime Minister Nawaz Sharif struck an upbeat tone on Tuesday at the conclusion of his “mediation trip” to Saudi Arabia and Iran saying Pakistan’s initiative was welcomed in both capitals and he expected it to progress.

“Leaders of both countries appreciated our effort to reduce tensions between them. I received a positive response and I’m deeply encouraged.

It is a sacred responsibility,” Mr Sharif told Pakistani reporters accompanying him in Tehran after his meetings with President Hassan Rouhani, First Vice President Eshaq Jahangiri and Defence Minister Hossein Dehghan. Army Chief Gen Raheel Sharif, who is accompanying the prime minister, held separate meetings with Secretary of National Security Council Ali Shamkhani and Defence Minister Dehghan. The prime minister and the army chief were in Tehran after visiting Riyadh for what the government described as a move for defusing tensions between the two Muslim countries that were sparked by execution of Saudi dissident Sheikh Nimr and the subsequent attack on Saudi mission in Iran by protesters.

Mr Sharif said that in the next step Iran and Pakistan would appoint ‘focal persons’ for dealing with the matter. “The focal persons would work full time on this issue,” he said and added that he “would ask Saudi Arabia to also name someone for this purpose”. An understanding between Pakistan and Iran on designation of focal persons for pushing the process forward was the only major outcome of the nascent initiative, besides both disputing parties welcoming Islama­bad’s move, according to what has been disclosed to media. Sharing the essence of his meetings in Tehran and Riyadh, Mr Sharif noted that neither wanted tensions.

“Saudi leadership told me that they did not see Iran as an enemy and I heard similar sentiments from Iranian leaders, who too are not in favour of tensions,” the prime minister said and hoped that his mediation project would progress smoothly. In his meetings in Tehran Mr Sharif conveyed Saudi concerns and said that the Iranian position would be shared with Riyadh. The prime minister emphasised on undertaking “sincere efforts” and said Pakistan was already acting with sincerity. He said he believed the efforts could succeed if taken forward by other parties. Iranian President Rouhani had told Mr Sharif that discord between Muslim countries was unacceptable for Iran. Mr Rouhani set conditions for a rapprochement with Saudi Arabia. He said: “We want expansion of ties and do not welcome tensions on the condition that Muslim rights be respected and nations of the region be honoured and diplomatic frameworks be observed.”

Another statement on Mr Sharif’s meeting with First Vice President Jahangiri stressed the need for expanding bilateral economic cooperation after lifting of the sanctions and collaborating in the fight against extremism and terrorism. Mr Sharif reportedly assured Iran of cooperation particularly in the energy sector. He further told Mr Jahangiri that he would instruct the State Bank of Pakistan and the Finance Ministry to initiate steps for resuming banking mechanisms.