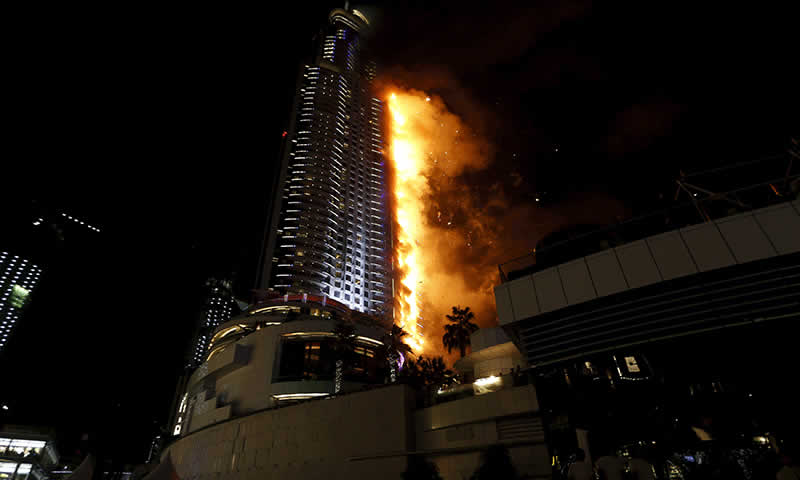 Fire engulfed a 63-storey skyscraper in downtown Dubai on Thursday night, but there appeared to be no injuries, a civil defence official said.

Large tongues of flame shooting skywards enveloped the luxury hotel and residential block, which lies across a plaza from the world’s tallest building, the Burj Khalifa, where people were gathering for a spectacular fireworks display due to mark the start of the New Year.

“There are no injuries, thank God,” Major General Rashed al-Matrushi, general director of the Dubai Civil Defence, told the the pan-Arab television channel Al Arabiya. He said the festivities would go ahead despite the fire, saying: “Of course, it will not affect the celebration.” Dubai government’s media office tweeted that civil defence teams were working to evacuate the 300-metre hotel and tackle the fire. It said the blaze had started on the 20th floor, on the outside of the tower, and that internal fire-fighting systems were operating to try to prevent it getting inside the hotel.

Four fire brigade teams were at the site. Dubai is a trade, tourism and investment hub for the Gulf region, and is one of seven emirates that make up the United Arab Emirates (UAE). Every year, Dubai stages one of the world’s most spectacular fireworks displays from the 160-storey Burj, which opened in 2010 and stands almost 830 metres (2,722 feet) tall.