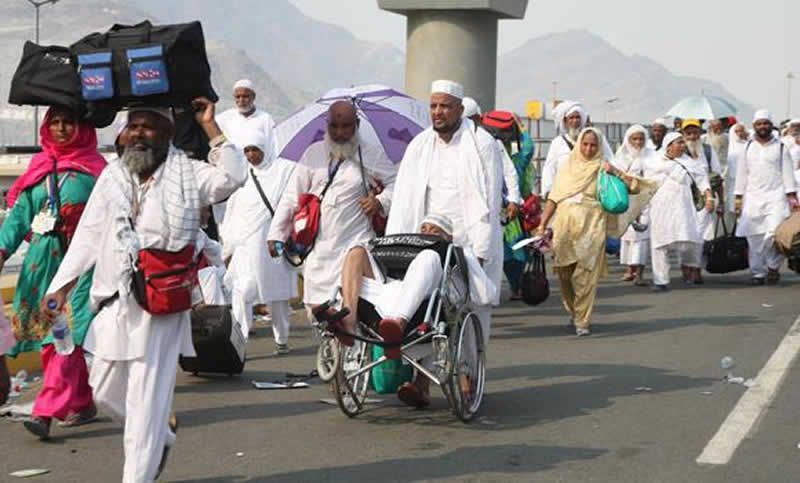 The government announced here on Monday a special package for the families of people killed and injured in last week’s Mina stampede.

“Two or three persons from the families of each deceased will be sent to perform Umra after the Haj mission is over so that they can pray for the deceased Hajis buried there,” MNA Tariq Fazal Chau­dhry,

The focal person appointed by the prime minister to handle matters relating to the incident, said at a press conference.  He said Rs500,000 would be given to the next of kin of the deceased and Rs200,000 to the families of the injured. According to a late night report, Religious Affairs Minister Sardar Muhammad Yousuf said the death toll of Pakistani pilgrims had risen to 42 and 62 were missing. Mr Chaudhry said the total number of deaths caused by the stampede had risen to 1,100 and photographs of the victims were available at Pakistan’s embassy in Jeddah.  “Of the missing Hajis, 36 had gone through the private sector and the rest through the government’s Haj scheme,” Mr Chaudhry said. “Our embassy’s staff and officials of the Haj mission are visiting the injured in the hospitals along with doctors.”Replying to a question, he said some pictures on the social media of bodies being pushed by a truck appeared to be old and not related to last week’s incident.

The MNA said the matter did not concern only Pakistan — the dead, injured and missing belonged to numerous countries and the Saudi authorities were under stress. The government has set up two telephone helplines for information about the pilgrims — 042- 111-725-425 for within the country and 0800-11-666-22 from Saudi Arabia. About the missing pilgrims, he said 228 persons in various hospitals had been identified by the Haj mission staff and the religious affairs minister would stay in Saudi Arabia till the issue was resolved. “We are trying to get in touch with the families of the missing Hajis and those trying to approach the authorities through the helpline. We are also collecting the pictures of the missing people and trying to match them with those of the 1,100 deceased and tracing them in the hospitals.”