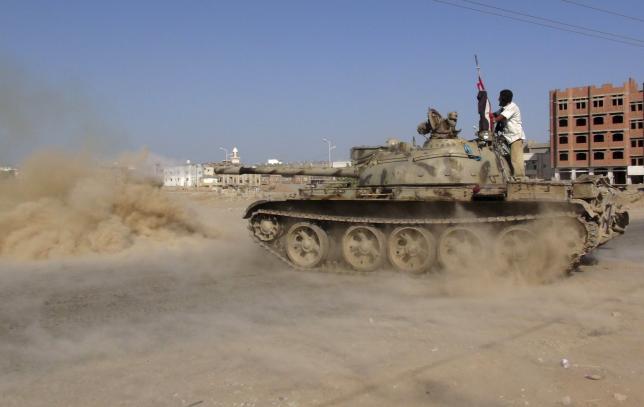 Houthi rebels’ tanks and sniper fire killed at least 12 civilians overnight in Yemen’s Aden as they advanced toward the center of the city, residents said, and a Saudi-led coalition airdropped arms to anti-Houthi fighters in the city of Taiz.

Local fighters backed by Arab coalition air strikes nationwide have been battling the Iran-allied Shi’ite Houthis for a month but on Wednesday the rebels had taken several more streets in the port city.

The Houthis took the capital Sanaa in September, demanding a more inclusive government, and swept south, rattling top world oil exporter Saudi Arabia and its allies, who fear what they see as expanding Iranian influence in the region. Fighting was still raging in the Khor Maksar district of Aden, seen as the main bulwark against the Houthis, early on Wednesday. Residents and city officials said the group shelled government buildings and residential neighborhoods controlled by their armed opponents, and dozens of families had fled. “The world, the coalition and the United Nations need to step in urgently to save our neighborhood, which has truly become a disaster area after this indiscriminate shelling,” resident Ali Mohammed Yahya said. Several Arab air strikes pounded Houthi positions in the city’s suburbs, residents said.

About 200 km (120 miles) to the north, Arab aircraft dropped weapons for tribal and Islamist militiamen fighting the Houthis in the city of Taiz, where they have been battling the group with heavy artillery in city streets for days. Despite weeks of bombing, the Houthis have retained their dominant position on battle fronts across Yemen, which have barely moved, and no visible progress has been made towards peace talks. Talks with President Abd-Rabbu Mansour Hadi collapsed in early April and he went into exile. Chaos then set in as the Iran-allied Houthi forces fought their way south, battling loyalist army units, regional tribes and al Qaeda militants. – Reuters