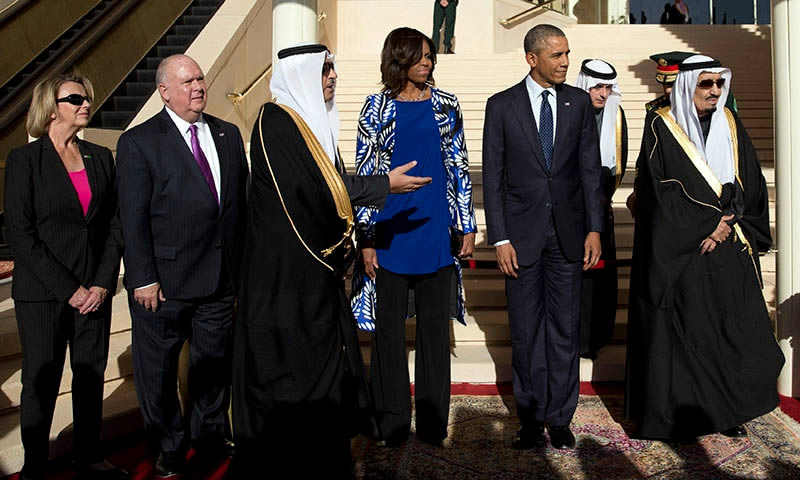 The leaders also tackled the issue of Iran’s nuclear programme and human rights in the conservative kingdom, a senior US official said.

Riyadh has been part of the US-led coalition carrying out air strikes against IS since last year and is a long-time regional ally of Washington. But analysts say Riyadh has grown dissatisfied with what it sees as a lack of American engagement in crises elsewhere, including Yemen and Libya, as the US looks to Asia. There has also been unease in the kingdom about Obama’s pursuit of a nuclear deal with Shiite-dominated Iran, the regional rival of Sunni-majority Saudi Arabia. Members of the 29-member bipartisan US delegation, which included former Bush-era officials, said they wanted to show support for the US-Saudi relationship. “I believe it is important that we demonstrate to the Saudis the importance that they represent to us,” said James Baker, secretary of state during the first Gulf War against Iraqi dictator Saddam Hussain. “This is an extraordinarily critical and sensitive time in the Middle East when everything seems to be falling apart. And the kingdom in some way is becoming an island of stability,” said Baker.

The Americans arrived for a four-hour stop from India, where Obama cut short a state visit following the death Friday of Salman’s predecessor, King Abdullah. Saudi television showed Salman, 79, welcoming Obama and his wife Michelle at the bottom of a red-carpeted ramp before a military band played the US and Saudi national anthems. In contrast to Saudi women, required to dress head-to-toe in black, Mrs Obama wore dark slacks and a blue top with her hair uncovered. Crown Prince Moqren and Mohammed bin Nayef, the powerful interior minister who is second in line to the throne, were among those greeting the Americans. The US president then boarded a black limousine taking him for talks and dinner with Salman at central Riyadh’s Erga Palace, the king’s private residence where the smell of incense hung heavily in the air. Good to see you,” Obama repeatedly said to his Saudi hosts before they dined on Arabic and Western dishes including shish tawook and baked lobster.

They then left the kingdom. Obama last visited Saudi Arabia in March, when he held talks with Abdullah. A senior US official said Obama and Salman discussed “the campaign against the Islamic State… the need to continue providing support to the opposition in Syria (and) the need to promote unity in Iraq”. IS, a Sunni extremist group, released a video celebrating the death of the “tyrant Abdullah” and said that, “Allah permitting,” they will invade the Arabian Peninsula soon, SITE Intelligence Group said. Several other topics, including Riyadh’s human rights record, heavily criticised by activists, and Iranian nuclear talks, were also broached during Tuesday’s visit. The US official said Obama discussed human rights “in broad terms,” but did not raise with Salman the case of blogger Raef Badawi, who was sentenced to 1,000 lashes for insulting Islam and whose case has attracted international concern. -dawn