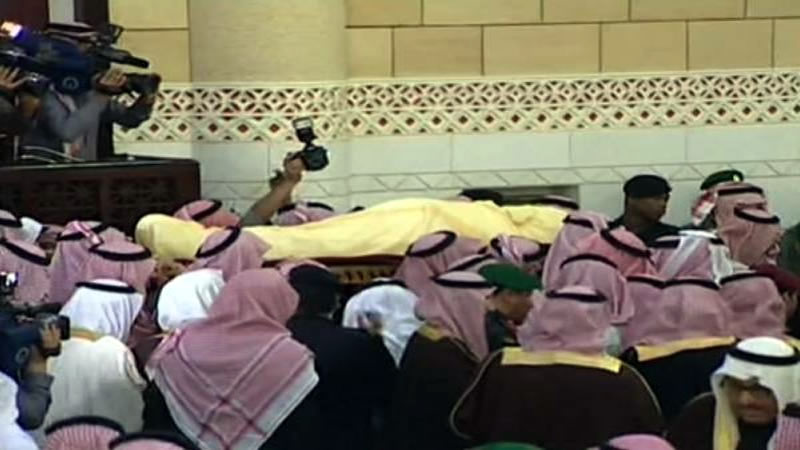 The PM, who is accompanied by his brother Chief Minister Punjab Mian Shahbaz Sharif and other officials, offered the funeral prayer of the late King Abdullah along with other leaders of Muslim states. King Abdullah’s body was bathed, as is the Islamic tradition, and taken to the main mosque in Riyadh, the Imam Turki bin Abdullah Mosque.

Funeral prayers were held at that mosque and mosques throughout the country. The body was then taken to the Al Oud cemetery in Riyadh for burial. The late King Abdullah was replaced by his half-brother Salman as the absolute ruler of the world’s top oil exporter and the spiritual home of Islam. Global leaders paid tribute to the late monarch, a cautious reformer who led his kingdom through a turbulent decade in a region shaken by the Arab Spring uprisings and Islamic extremism.

The royal court said in a statement that Abdullah, believed to be around 90, died at 1:00 am local time, expressing its “great sadness and mourning”. Another of the late monarch’s half-brothers, Moqren, was named the new crown prince. In his first public statement as the new ruler, the 79-year-old King Salman vowed to maintain a steady course for the conservative kingdom. “We will remain with God’s strength attached to the straight path that this state has walked since its establishment,” Salman said in televised remarks. He called for “unity and solidarity” among Muslims and asked for God to support him in his “great responsibility”.

Salman moved quickly to consolidate his hold on power, naming Interior Minister Mohammed bin Nayef as the new deputy crown prince and one of his own sons, Prince Mohammed, to replace him as defence minister. Abdullah will be buried later Friday following afternoon prayers, with citizens then invited to pledge allegiance to the new monarch and the crown prince at the royal palace. The royal court did not disclose the cause of Abdullah’s death, but he was hospitalised in December suffering from pneumonia and had been breathing with the aid of a tube.