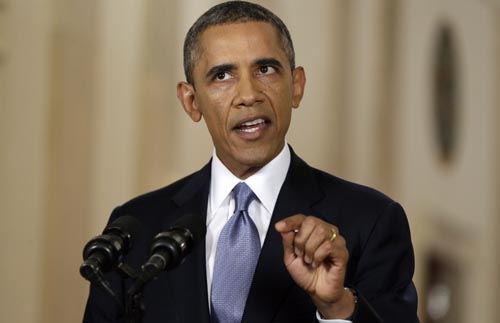 Military leaders from more than 20 countries have met in the United States to discuss how to combat the Islamic State of Iraq and the Levant (ISIL), as US and Russia announced an agreement to share intelligence on the armed rebel group.

US President Barack Obama met on Tuesday with defence ministers from 22 countries, acknowledging that he is “deeply concerned” about the advances ISIL is making in Iraq’s Anbar province and in Syria, including the Kurdish town of Kobane.

He vowed that US air strikes will continue in both countries, while saying that “important successes” have also been made in stopping ISIL in areas such as Erbil and Mosul. “This is going to be a long-term campaign,” Obama said without hinting at any changes in the current military strategy, which mainly involves air strikes. “There are not quick fixes involved. We are still in the early stages. As with any military effort, there will be days of progress and there are going to be periods of setbacks, but our coalition is united behind this long-term effort.” A US military official told Reuters news agency after the talks that there was an acknowledgement that ISIL was making some gains on the ground, despite the air strikes.

“In the short term, there are some gains that they have been able to make. In the long term, that momentum will be reversed,” the official said. Also on Tuesday, US Secretary of State John Kerry met with his Russian counterpart Sergey Lavrov in Paris, to discuss the latest developments in Iraq and Syria. Kerry said the US had agreed to “intensify intelligence cooperation with respect to ISIL and other counter-terrorism challenges of the region”. He said Moscow would also explore whether it could do more to help arm and train Iraq’s embattled military. However, Kerry stopped short of saying that Moscow would join the US-led international coalition against ISIL. The US and Russia have common ground in their concern about fighters from their countries joining ISIL, and then returning to carry out attacks at home.

“There may be as many as 500 or more from Russia,” Kerry said. These include fighters from Russia’s predominantly Muslim North Caucasus, a region where armed rebels have waged daily violence to establish an Islamic state. American-led forces sharply intensified air strikes against ISIL on Monday and Tuesday in the Kurdish town of Kobane in Syria near its border with Turkey. The coalition had conducted 21 attacks in two days and appeared to have slowed ISIL advances there, the US military said, but cautioned that the situation remained fluid. US Central Command said the strikes on the rebel group’s staging areas, compounds and armed vehicles, were meant to hit supply lines and stop reinforcements.

The number of air raids is the largest in a single 24-hour period since the coalition began its bombing of ISIL in Syria. “Indications are that air strikes have slowed ISIL advances,” it said, adding however that the situation remained fluid. Al Jazeera’s Patty Culhane, reporting from outside the Obama meeting at Andrew’s Air Force Base, said about 90 percent of the air strikes involved US planes. Contrary to reports in other media, the attacks on Kobane had not forced ISIL to withdraw from a strategic hill overlooking the town. -aljazeera