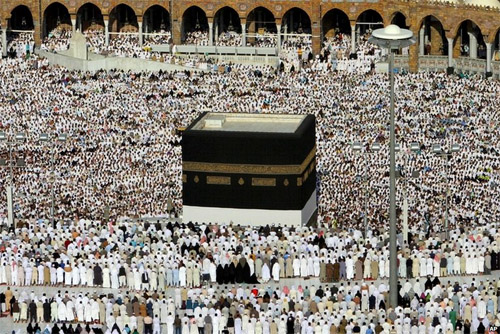 The Haj rituals have begun with the convergence of the pilgrims in the tent city of Mina in Saudi Arabia. Over two million pilgrims will perform Haj this year.

The Saudi Arabian government has made elaborate arrangements to ensure the smooth flow of pilgrims from Makkah to Mina and Taif. The pilgrims will spend the day and night in prayers and then move to Arafat Friday (today) morning.

Saudi Municipal and Rural Affairs Minister Prince Mansour bin Miteb said the newly expanded Jamrat Bridge in Mina would help pilgrims perform the “Satan-stoning” ritual easily without any risk of stampede.  As many as 1.4 million foreign pilgrims have arrived in Makkah for Haj which all physically and financially able Muslims are required to perform once in their life. The rituals of the haj are as follows: IHRAM: a state in which pilgrims wear special outfits, two-piece white seamless garments for men and any loose dress for women who must completely cover themselves except for their hands and faces. NIQAB (a face covering that only reveals the eyes) is prohibited. Sex is forbidden during Ihram and pilgrims must refrain from quarrelling, covering the head (for men), cutting hair, clipping nails, wearing socks or shoes, except for sandals exposing the instep. [contentblock id=2 img=adsense.png]

“I am answering your call, God,” every pilgrim chants. Once in Makkah, pilgrims perform Tawaf or circumambulation, seven times counter-clockwise around the Kaaba, in whose direction Muslims pray wherever they are in the world. The Kaaba was first built as a sacred house in Makkah by Hazrat Adam (AS), the father of the human race. The holy Quran says Abraham (AS) and his son Hazrat Ismael (AS) rebuilt the Kaaba. Each circle starts and ends at the Black Stone, also known as the cornerstone, at the southern corner of the Kaaba. Pilgrims should point their palms to the stone saying: “Allahu Akbar” (God is the greatest). Walking back and forth between the two stone spots of Safa and Marwah seven times is an act known as Sa’i. The distance between them is just 400 metres (437 yards). Pilgrims are emulating Hagar, the second wife of Hazrat Ibrahim (AS), who was desperately seeking water for her infant, Hazrat Ismael (AS).

The preceding rituals are considered the Umra, or lesser pilgrimage, made ahead of the main rites of Haj. The main rites of Haj start on 8th of Zilhaj and end on the 13th.  Pilgrims head to Mina, around five kilometres east of the Holy Mosque, on the first day of Haj known as Tarwiah (watering) Day. Pilgrims traditionally water their animals and stock water for their trip to Mount Arafat, about 10 kilometres southeast of Mina. Arafat Day, on the 9th of Zilhaj, is the climax of the Haj season as all pilgrims gather at Mount Arafat and its surrounding plain. Pilgrims stay at Arafat where Prophet Hazrat Muhammad (PBUH) delivered his final Haj sermon, until the evening. They spend the day reciting from the Holy Quran and praying. After sunset on the 9th of Zilhaj, pilgrims leave for Muzdalifah, half-way between Arafat and Mina, where they stay at least until midnight. They gather pebbles to perform the symbolic “stoning of Satan”.

Eidul Azha: After Fajr prayers on the 10th of Zilhaj, pilgrims head back to Mina. The first of three stoning rites, known as Jamarat al-Aqabah, begins after sunrise. Traditionally, seven pebbles are thrown at a post representing Satan. Since 2004 it has been replaced by walls to accommodate the rising numbers of pilgrims. The ritual is an emulation of Hazrat Abraham’s stoning of Satan at the three spots where he tried to dissuade the prophet from obeying God’s order to sacrifice Hazrat Ismael. After the first stoning, pilgrims offer sacrifices by slaughtering a sheep and the meat is distributed to needy Muslims. This rite also emulates the actions of Hazrat Abraham.

He prepared to sacrifice his son Ismael on the order of God who provided a lamb in the boy’s place at the last moment. Pilgrims no longer carry out this rite themselves. They instead pay agencies which distribute meat to needy Muslims around the world. Men then shave their heads or trim their hair while women cut a fingertip-length of their hair. After that they can end their Ihram and change back to their usual clothing. Sex remains prohibited. Pilgrims then return to the Grand Mosque in Makkah, perform Tawaf al-Efadha, circumambulating seven times around the Kaaba, then perform Sa’i, moving seven times between Safa and Marwah. With that, pilgrims end their Ihram. -nation