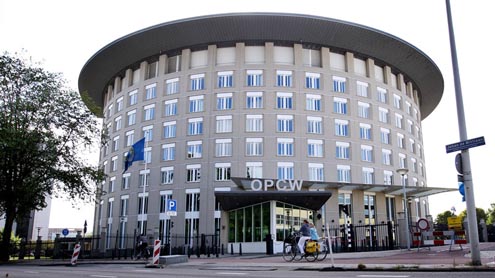 THE HAGUE: The world’s chemical watchdog on Tuesday agreed on the final details of a plan to destroy Syria’s arsenal, vowing to push ahead with the unprecedented project despite delays.

The hectic pace of the UN-backed bid to rid Syria of its entire chemical weapons stockpile by mid-2014 has slowed recently but the meeting decided not yet to change any deadlines despite security and technical issues in the war-ravaged country. A spokesman for the Organisation for the Prohibition of Chemical Weapons (OPCW) declined to comment on the Executive Council meeting, but a diplomat who was present said the international plan had been adopted.

“Efforts continue to implement the plan, but there is realism that there are challenges,” the diplomat told AFP. The plan, details of which the OPCW said it would release on Wednesday, draws on the resources of multiple countries to remove and destroy Syria’s declared stockpile of around 1,300 tonnes of chemicals weapons, ingredients and precursors.

Several nations have already announced their offers of help, including the US which is to destroy “hundreds of tonnes” of Category One chemicals — including mustard gas, sarin and VX nerve gas — aboard a specially-equipped ship in international waters.

A Danish and a Norwegian frigate are waiting in Cyprus to escort Nordic cargo ships to collect the chemicals from Syria’s main port Latakia, but the hazardous materials are still at several sites around Syria, sources familiar with the matter said. Joint UN-OPCW mission inspectors and Syrian regime forces, who are in charge of moving the chemicals, have struggled to get secure packaging materials to storage sites.

The operation has been affected by everything from heavy snow to a customs strike, the diplomat said. OPCW head Ahmet Uzumcu told an OPCW meeting last month that the road between Damascus and Homs was frequently closed and that “future verification activities will be impacted by this situation”.

The OPCW had set itself a December 31 deadline for the most dangerous chemicals to be taken out of Syria, via Latakia, but that date is likely to be pushed back. Italy has offered an unnamed port for the chemicals to be “transloaded” from the Nordic vessels to the US ship, the MV Cape Ray, although that operation will likely take place in secret.

Italian Foreign Minister Emma Bonino has said that OPCW officials will only brief Italian MPs on the “transloading” plan early in the New Year. The OPCW has received expressions of interest from 42 companies around the world for destroying some of Syria’s less-toxic chemicals, but also the effluent left over from destruction aboard the US ship.

The tendering process for their destruction is expected to begin on Thursday, a diplomatic source said. A US-Russia deal for Syria to surrender its chemical arsenal narrowly averted US airstrikes on the regime of President Bashar al-Assad, after Washington said 1,400 people were gassed in the rebel-held Ghouta area near Damascus in August.-Dawn