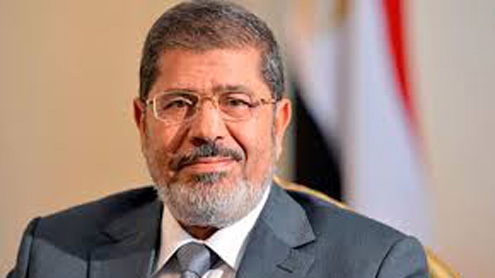 Egypt’s imprisoned ousted President Muhammad Mursi is meeting Tuesday with a team of lawyers who seek to defend him in his ongoing trial on charges of inciting murder, his son said.

But the deposed leader, who wants to defend himself, has not yet agreed to let the team represent him. Rather, he wants to discuss taking legal action against others, his son said. Mursi has been held in a secret location since his removal on July 3, and was transferred to a high security prison in the Mediterranean port city of Alexandria after the opening session of his trial on Nov. 4. He had so far declined legal representation.

The defense team spoke to him briefly during the trial, held in a police academy in eastern Cairo. In the opening session of his trial, his first public appearance since his ouster, Mursi called the process illegitimate, saying the panel of judges didn’t have jurisdiction to try a president. He repeatedly insisted he remains the country’s leader and called his trial a “cover for a military coup. The trial was adjourned to Jan. 8.

At the next session, Mursi is expected to tell the court whether he will accept the defense team assembled by the Muslim Brotherhood to represent the ousted president and his codefendants. Osama Mursi, himself a lawyer, told The Associated Press that his father still had not agreed to let attorneys represent him. He wants to take legal action … against others and not to defend himself,” he said before going into the meeting with his father and four other lawyers. Lawyers on the team had told local media that they will seek to convince Mursi to accept the defense team, and that it would not undercut his challenge to the trial’s legitimacy.

Mursi and 14 codefendants — seven of whom are still at large — are charged with inciting the killing of protesters who massed outside the presidential palace in December 2012 and demanded that he call off a referendum on a new constitution. Brotherhood members and Supporters attacked a sit-in by the protesters, sparking clashes that left 10 people dead. Osama Mursi said his father continues to refuse to cooperate with his interrogators. -Arabnews