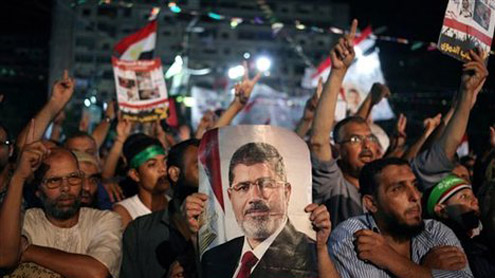 Deep in the desert and far from his former base of power, ousted President Mohammed Morsi is being held in a sprawling penitentiary that is notorious as one of Egypt’s highest-security prisons.

The move appears aimed not only at isolating him from other Muslim Brotherhood leaders who are jailed in Cairo but also to prevent his supporters from staging protests — or even trying to engineer a prison break, like those that occurred during the Arab Spring uprising of 2011. Morsi spent his first night at the Borg el-Arab prison in a hospital room at the facility, complaining of high blood pressure and high blood sugar after a dramatic court appearance earlier Monday, the start of his trial on charges of inciting the killing of protesters in December 2012.

The trial was adjourned by the judge for two months. Morsi, 62, has been reported to have a number of ailments, including diabetes and a peptic ulcer. His room in the prison hospital has a TV set and a private bathroom, security officials said. The 50-acre prison compound, about 30 kilometers (19 miles) from Alexandria, is garrisoned by a special unit of the security forces and sits behind layers of high concrete walls. New checkpoints stretching for a mile beyond the prison gates have been set up to make it more difficult for Morsi’s supporters to congregate in the area for possible protests.

Security officials said Borg el-Arab prison was the preferred choice of Egyptian authorities after Morsi spent four months in a secret military facility, held virtually incommunicado since he was ousted July 3 in a popularly backed military coup. The security officials spoke on condition of anonymity because they were not authorized to talk to the media. Officials have expressed fears about the possibility of jailbreaks, especially after Morsi and more than 30 Brotherhood leaders were freed from another remote prison at the height of the 2011 uprising that deposed autocratic leader Hosni Mubarak.

Morsi is still under investigation for the case and may yet face charges of conspiring with the Palestinian militant group Hamas to break out of prison. The Borg el-Arab compound was one of the few complexes attacked without success during the uprising, when officials said highly organized attacks occurred at 11 of Egypt’s more than 40 prisons, springing thousands of inmates. “I think moving him there was mainly a security concern,” said Mohammed Zarie, the head of a human rights institution that works on reforming Egypt’s criminal laws and frequently visits prisons. “They want to avoid a security disaster.”

The complex is one of Egypt’s newest prisons, built in 2004 and designed as a maximum-security facility. There are two sets of buildings: one for detainees awaiting sentence and another for inmates convicted of serious crimes, including those on death row. The units are surrounded by two separate walls, making escape or an assault difficult.Borg el-Arab was one of the first prisons in Egypt to install security cameras, a senior security official in Cairo said. It houses some of Egypt’s most notorious criminals, but they are held separately from prisoners with political backgrounds, Zarie said. It also holds some Palestinian militants arrested on charges of taking part in attacks in the restive Sinai Peninsula.

At least two other senior Brotherhood members are held there — former lawmakers Sobhi Saleh and Hassan el-Prince. While Egyptian prisons are notorious for treating inmates poorly, Zarie said it can vary according to what instructions the guards receive from the prison authorities. “If the instructions are to treat him well, he will get what he wants,” Zarie said of Morsi. “If it is sticking by the book, then they may impose restrictions on him.”Morsi was transferred to the prison by helicopter after the chaotic session Monday during which he repeatedly interrupted the judge, refused to enter a plea and questioned the legitimacy of the court.

The ousted leader proclaimed he was still president of Egypt. His frequent interruptions and those of his co-defendants forced the judge to adjourn the sessions twice, before scheduling the next hearing Jan. 8. It was Morsi’s first public appearance since he was deposed. Most of the leaders of the Brotherhood, including those on trial with Morsi, are held in Cairo’s Tora prison complex, which is located in a residential area of the capital and is more difficult to isolate. Mubarak, 85, was convicted in 2012 on charges connected to the killing of hundreds of protesters by police during the uprising and sentence to life in prison.

But the verdict was later overturned on grounds prosecutors had not fully proven the charges, and his retrial began earlier this year.He was first held in a military hospital, then moved to the Tora prison complex, where a special room in its hospital unit was prepared for him. He now is under house arrest, back in the military hospital. -Yahoo