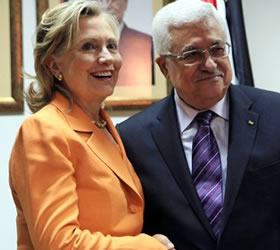 AMMAN: US Secretary of State Hillary Rodham Clinton said Thursday the United States planned to involve Syria and Lebanon in talks with Israel with the aim of reaching “comprehensive” peace in the Middle East as enshrined in the Arab peace initiative.

“US Middle East envoy George Mitchell is on his way for consultations in Damascus and Beirut,” Clinton told a joint press conference with Jordanian Foreign Minister Nasser Judeh after her talks with King Abdallah over a working lunch.

The two sides described the meeting as “very productive” and a royal court statement said that Clinton briefed the monarch on the outcome of the new round of direct talks between the Palestinians and Israel and her discussions over the past three days with the Israeli Prime Minister Benjamin Netanyahu and Palestinian President Mahmoud Abbas.

“We discussed the ongoing direct negotiations and expressed confidence that Netanyahu and Abbas are serious and can take the difficult decisions to resolve core issues within a year,” Clinton said.

“I also have confidence that the two leaders can reach the results we want — two states that live in security and peace,” she added.

She praised the Arab peace initiative as an excellent document that “holds out the very promise we seek” — a comprehensive peace in the Middle East.

The Arab peace plan, which was adopted by the Arab summit in Beirut in 2002, offers Israel recognition by all Arab states if it pulls out from all the Arab territories it seized in the 1967 Middle East War, including East Jerusalem.

On his part, Judeh said Jordan was “encouraged” by the outcome of the new round of peace talks between Israel and the Palestinian authority as reported by the US secretary of state. He quoted Clinton as saying that the two sides had started discussion on the controversial core issues — Jerusalem, borders, the refugees and security.

But Clinton’s optimism was not reflected in remarks by officials who said Israel has rejected a proposal to extend by three months a West Bank settlement building freeze whose looming expiration threatens to sink peace talks.

Egyptian President Hosni Mubarak told Israel’s Channel 1 television on Thursday he proposed a three-month extension of the moratorium in a meeting with Netanyahu on Wednesday.

Looming over the negotiations is a Palestinian threat to pull out of the nascent talks if new construction begins in the West Bank settlements when the 10-month moratorium ends Sept. 30.

“I spoke with him (Netanyahu) about the issue and told him to give it another three months during the negotiations,” Mubarak said in an excerpt from the interview aired on Israel Radio.

Officials close to the talks said the United States had made a similar proposal and Netanyahu, whose governing coalition is dominated by pro-settler parties, turned it down.

In a statement, Netanyahu’s bureau said it would not comment on the substance of the negotiations but that he was standing by his position not to extend the moratorium. – Arabnews