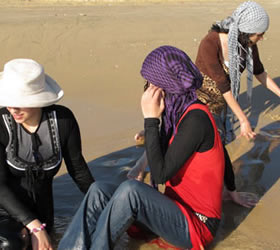 The day starts early, at a petrol station alongside a roaring Jerusalem road. The mood among the 15 Israeli women is a little tense, but it’s hardly surprising – they’re about to break the law and with it one of the country’s taboos. They plan to drive into the occupied West Bank, pick up Palestinian women and children and take them on a day trip to Tel Aviv.

Today’s is the second such trip – another group of women went public with a similar action last month. It is hoped that these will become regular outings, designed to create awareness of the laws that govern movement for Palestinians, and to challenge the fears that Israelis have about travelling into the West Bank.

Riki is a 63-year-old from Tel Aviv who, like the other women did not want to give her surname. She said it took her time to sign up to the trips. “I was resistant to breaking the law. But then I realised that civil action is the only way to go forward, that breaking an illegal law becomes legal.”

The women take off in a convoy of cars, through an Israeli checkpoint used by settlers and into several villages around Hebron. There are dozens of Palestinian women waiting for them and each Israeli driver is allocated passengers.

As two young Palestinian women climb into the car, they remove hijabs, scarves and floor-length coats to reveal skinny jeans and long hair – a look that ensures they pass through the Israeli settler-only checkpoint without scrutiny. “I am afraid of the soldiers,” said 21-year-old Sara, nervously. But she and 19-year-old Sahar, visibly relax as the car breezes past the checkpoint.

They pull CDs out of bags and are soon listening to loud Arabic dabke music as the car heads along a road that joins the main highway to Tel Aviv. “It’s like we are using the tools of the occupation,” said Irit, one of the drivers. “It just wouldn’t occur to the soldiers at the checkpoints that Israeli women would want to do this.”

As Tel Aviv nears, the Palestinian passengers silently survey the tall buildings and outdoor cafes and seem especially taken with the ubiquitous motorcycles and mopeds that speed around the city. “I would like to ride on one, like that,” said Sara, pointing to a woman in shorts perched on the back of a bike. But all the Palestinian women have just one request: to go to the sea. For most, it’s their first trip to the seaside, even though it is a short drive from home.

The passengers join another carload and head to the promenade in Jaffa, the mixed Arab-Israeli city stuck to the tail-end of Tel Aviv, where the Palestinian women race to greet the waves crashing against the bright rocks. “It is so much more beautiful than I thought,” said Nawal, watching her gleeful seven-year-old daughter skipping backwards to avoid being sprayed by the waves. “It is more beautiful than on TV, the colour is amazing.”

Fatima, 24, gazes out at the horizon. “I didn’t know that the sound of the sea is so relaxing,” she said. Sara asks for a sheet of paper, speedily folds it into a paper boat and writes her name on it, intending to set it out to sea. “So that it will remember me,” she said.

The group convenes at a Jaffa restaurant – about 45 of them in total, including seven children. They are a cheerful party stretched across two long tables. From afar they seem just like any other restaurant party, as the women chat about children, weight gain and health.

But the excursion is far from ordinary. All Palestinians need permits to enter Israel and the penalties for not doing so can involve imprisonment. It is also against the law for Israelis to “smuggle” Palestinians without a permit across the Green Line.

A few months ago Ilana Hammerman, an Israeli journalist, wrote an account of her day trip to Tel Aviv with West Bank Palestinians in Haaretz newspaper. That prompted a criminal investigation against her, for violating Israel’s law of entry. But it also inspired a group of women to take the same trip and then take an advertisement in the newspaper to publicise the fact. Since then, there have been hundreds of signatories to a petition of support and many women, on both sides, ready to defy the law.

That’s one of the purposes of the action, said Esti, who has been on both trips. “We want more Israelis to realise that there is nothing to be scared of. We want more people to refuse to accept the ideology that keeps us apart – and to just refuse to be enemies.” -guardian