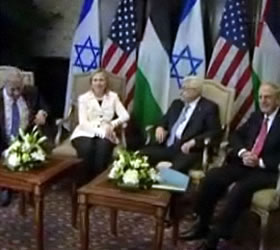 Israeli and Palestinian leaders have failed to make headway during their first “serious discussions” in Egypt. Despite keen encouragement from US Secretary of State Hillary Clinton, Tuesday’s meeting was marred by the issue of Jewish settlements.

AP – Under pressure to compromise, Israeli and Palestinian leaders on Tuesday dug into the central issues blocking a peace deal but ended the latest round of talks without visible progress on the divisive issue of Jewish settlements.
Israeli Prime Minister Benjamin Netanyahu and Palestinian President Mahmoud Abbas held an extra, unscheduled session with U.S. Secretary of State Hillary Rodham Clinton, but there was no word on signs of a breakthrough.
After the leaders’ first meeting at this Egyptian Red Sea resort, U.S. peace envoy George Mitchell offered reporters a mildly positive assessment.
Mitchell said the core issues in the peace process were discussed, but all sides agreed not to reveal which ones or to what result.

“I’m not going to attempt to identify each one that was discussed, but several were in a very serious, detailed and extensive discussion,” Mitchell said at a news conference. With the talks concluded in the neutral ground of Egypt, they now shift on Wednesday to Jerusalem, a city at the center of the Palestinian-Israeli dispute that both sides claim as their capital.

Clinton did not comment, but told reporters on the flight to Egypt from Washington on Monday that “the time is ripe” for an agreement based on the notion of a sovereign Palestinian state and a secure Israel. Mitchell was pressed to say whether there was progress on settlements and responded: “We continue our efforts to make progress and we believe that we are moving in the right direction, overall.”

He repeated Clinton’s call for Israel to extend its soon-to-expire curb on settlement construction in the West Bank.

“We think it makes sense to extend the moratorium, especially given that the talks are moving in a constructive direction,” he said. “We know this is a politically sensitive issue in Israel. But we’ve also called on President Abbas to take steps that help encourage and facilitate this process. We believe both sides have a responsibility to help ensure that these talks continue in a constructive manner.

The ultimate aim is a deal that creates a sovereign Palestinian state beside a secure Israel.

Netanyahu’s spokesman, Mark Regev, said much work lay ahead and that the Palestinian and Israeli leaders have to make hard decisions. “The way to an agreement is to look at all the core issues together, not to run away from any one of them,” he said.

The Palestinians want Israel’s settlement curb extended beyond the current Sept. 26 deadline and have said failure to do so will bring the peace talks to an early end. Netanyahu has suggested at least some of the restraints will be lifted.

Clinton said the Obama administration believes Israel should extend the moratorium, but she also said it would take an effort by both sides to find a way around the problem.

“We recognize that an agreement that could be forged between the Israelis and the Palestinians … that would enable the negotiations to continue is in the best interests of both sides,” she said.

Clinton spoke with reporters Monday during a flight from Washington to Egypt for the latest round of talks, which began this month in Washington. The settlement freeze is not the only wrinkle in the way of launching the talks in earnest. The two sides disagree over what to discuss first: security or borders.

A senior Abbas aide, Mohammed Ishtayeh, appeared to take a hard line on the issue of settlement construction, telling reporters that an Israeli extension of its partial freeze would not signal progress in the negotiations but rather progress in “confidence building.”
“The freeze on settlements (construction) is not a topic in the negotiations,” he said. “Removing settlements is.” From the Israeli said, Netanyahu spokesman Mark Regev said, “If the expectation is that only Israel has to show flexibility then that is not a prescription for a successful process.”
Israeli Interior Minister Eli Yishai, a member of Netanyahu’s seven-member inner Cabinet, voiced his opposition to the settlement slowdown, reflecting the intense pressure on the prime minister within his coalition to resume construction once the moratorium ends.
“The freeze in the West Bank is incorrect and its good that it is ending,” Yishai told Israel Radio as the meetings in Egypt were taking place.
On Sunday, Netanyahu seemed to reject a total freeze on construction. He said Israel would not build thousands of planned homes. But without providing details or a timeline, he said, “We will not freeze the lives of the residents.”
Although some analysts caution that any peace deal faces daunting obstacles, Clinton has said an initial round of talks in Washington on Sept. 2 generated some momentum. They were the first direct in nearly two years. – France24
Twitter Facebook Google + Linkedin Comments