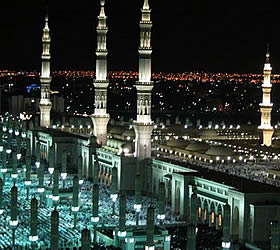 MAKKAH: About three million Muslims attended Khatm Al-Qur’an (end of the Qur’an recitation) prayers at the Grand Mosque in Makkah and Prophet’s Mosque in Madinah on Tuesday.

The imams who led the prayers urged Muslims to stand united.

The Grand Mosque in Makkah overflowed with worshippers who also came to perform Umrah, attend Taraweeh and Qiyamullail prayers. Thousands were standing in the courtyards around the mosque as well as streets leading to it to attend the prayer.

The Presidency of the Two Holy Mosques Affairs had made all arrangements to welcome the large crowds of worshippers. It has readied more than 30,000 prayer rugs at the mosque’s three floors.

The presidency has appointed about 3,000 cleaners to keep the mosque neat and tidy around the clock. It has also distributed 22,418 water coolers inside and outside the mosque to quench the thirst of worshippers.

Makkah Mayor Osama Al-Bar highlighted his organization’s efforts to ensure cleanliness of the city, monitoring of hygiene and commodity prices at shops and restaurants and removing garbage from the city.

Dr. Khaled Zafer, director of health in Makkah, said health centers and hospitals in the city have been readied to provide health services to the guests of God.

Brig. Jameel Arbaeen, director of Civil Defense in Makkah, said 300 officers have been appointed to provide first-aid services to pilgrims and visitors. “We have also readied 92 firefighting units in different parts of the city,” Arbaeen said. “We have also readied 300 motorbikes to reach accident spots quickly.”

Maj. Abdul Mohsen Al-Maiman, spokesman of Makkah police, said his organization had mobilized all its manpower resources to maintain law and order in the city and control crowds inside and outside the mosque. -arabnews