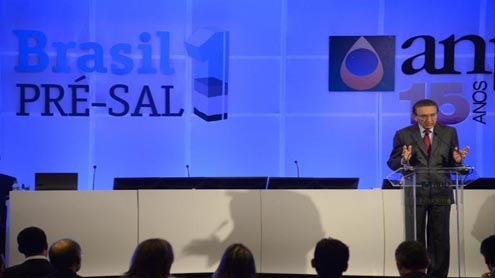 China’s CNOOC and CNPC, Anglo-Dutch giant Royal Dutch Shell and France’s Total joined Brazilian state operator Petrobras in winning 35-year concessions after meeting stringent conditions. The conditions stipulated, among other things, that Petrobras, which took a 40 percent stake — above the minimum 30 percent stipulated by Brasilia — would act as sole operator. Shell and Total both earned a 20 percent stake, with CNOOC and CNPC securing 10 percent each after initial forecasts said Petrobras would join forces solely with the Chinese duo. The five-firm consortium was the only bid to offer the Brazilian state the minimum 41.65 percent of oil to be extracted from the site, which holds an estimated eight to 12 billion barrels of oil.

That compares with Brazil’s current proven reserves of 15 billion barrels. Brazilian President DilmaRousseff hailed the auction’s outcome as a “success” that would bring about “small revolution” in the country. Analysts, meanwhile, saw the deal as a glass half full. “The auction per se was a failure as there was only one bidder who offered the minimum price, but the winning consortium … will be capable of extracting the Libra oil,” Adriano Pires of the Brazilan Infrastructure Center told AFP. “It came as a relief to the market and a stroke of luck for the government” that the auction, which sparked a strike among oilworkers opposed to foreign firms landing a slice of national assets, had taken place.

Petrobras saw its share price rise 5.3 percent in the wake of the auction while the federal government will, once the contract is signed in about a month, receive a big check for some $6.9 billion. Alexandre Szklo, an energy expert at Rio Federal University, largely shared Pires’ sentiment. “There was no real auction as such but the result is positive,” Szklo told AFP. Szklo said the presence of Shell and Total brought to the table “high technological offshore capacity” that the Chinese operators do not yet possess. We were expecting strong Chinese participation as they entered the fray with cash looking for reserves above all to bolster their energy security.

Less so (did we expect) the Europeans,” Szklo said. “What we got was the reverse and that will come as a relief for the government,” added Szklo, who sees the Shell and Total engagement as boosting the consortium’s technical capabilities. “The bonus the consortium will pay the state (the $6.9 billion) is also huge. It’s money which goes directly onto the government balance sheet and that is very positive,” he added. Mauricio Tolma squim, chairman of the public Energy Research Enterprise (EPE) also drew positives from the deal. “The auction was a positive outcome and a relief for the state in that it obtains resources to exploit the crude from the 1,500 square kilometer (540 square mile) oifield. “

Brazil is going to be able to develop its national industry and finance education” helped by a law that provides for oil royalties to fund health (25 percent) and education (75 percent).Magda Cham briard, head of oil regulator ANP, said Libra will produce 300 billion reais ($138 billion) in royalties alone, over 30 years. “The world gains a new large-scale oil producer in a region where there is no conflict” and which boasts a strong democracy, EPE’s Tolmasquim told AFP. Energy expert Giovanni Alves from the University of Sao Paulo (UNESP) went further. “In geopolitical terms Libra represents a fundamental change — a new group of strategic alliances which do not involve the United States.” US operators stayed away from the auction amid concerns of too much state intervention.

As well as granting special status to Petrobras, Brazil created a new state company, PPSA, to oversee offshore exploration. As of 2020, and after Libra and other pre-salt supplies come on stream, Brazil hopes to double production to around 4.3 million barrels a day. Currently, the South American giant ranks 13th on the global list of oil producers. But with the pre-salt supplies from Libra — the deposits lie beneath a thick layer of salt in deep water off the Atlantic coast — Brazil would vault into the top ten and become a major exporter.-Yahoo