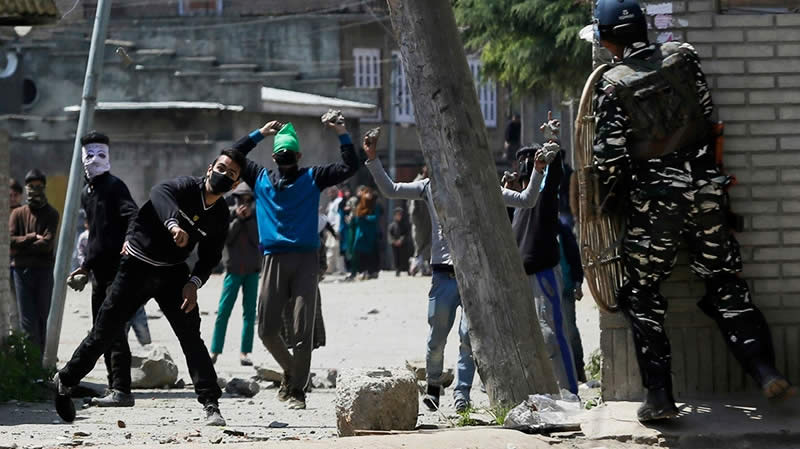 Six civilians were killed in Indian-occupied Kashmir on Sunday when police opened fire at protesters who stormed polling stations during a by-election for a parliamentary seat, a top officer said.

State and paramilitary police fired bullets and shotgun pellets as thousands of protesters shouting slogans against Indian rule charged into voting booths in Budgam district near the main city of Srinagar.

“Violent protests happened at many places in Budgam. Protesters damaged and snatched EVMs (electronic voting machines) at some places,” Shantmanu, the state’s chief electoral officer, told AFP. “Five persons have died so far in the violence,” said Shantmanu, who uses only one name.

Many were grievously injured with bullets fired by police and paramilitary troops, hospital sources in Srinagar said. The electoral officer said more than 100 government personnel, including police and paramilitary officers were also injured in the clashes. In the Charare-e-Sharif area of Budgam two people were killed when the paramilitary Border Security Force fired at protesters, he said.

Another person was killed in the Beerwah area of the same district when paramilitary police opened fire at a stone-throwing crowd. Three more were killed in the day-long clashes, with two of them succumbing to multiple pellet injuries from the shotguns which Indian paramilitary forces use in Kashmir for crowd control.

Polling had to be halted in more than dozen places amid a call by top Kashmiri leaders opposed to Indian rule to boycott the by-election. Only 6.5 percent of voters turned out to cast their ballot, Shantmanu said, 26 percent less than in the last elections held in 2014 and the lowest ever participation recorded in any election in the disputed territory.