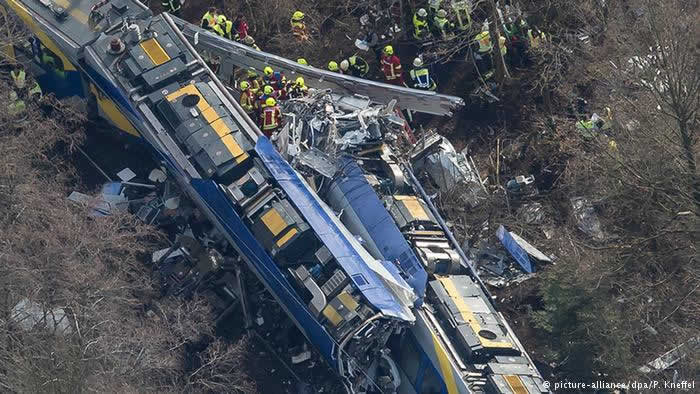 Ten people were killed and at least 81 injured on Tuesday when two passenger trains collided head-on at high speed in remote countryside in southern Germany. One passenger was still missing, police said, and 18 of those injured were in a serious condition.

The crash happened during the morning rush-hour about half way along a six-km (four-mile) stretch between the spa town of Bad Aibling and Kolbermoor in Bavaria, near to the border with Austria.

Ambulances could not reach the site, which was heavily wooded with a steep hill on one side and a river on the other, so helicopters had to airlift people to nearby hospitals. Police said recovery operations with heavy machinery would be suspended overnight and restart at daybreak on Wednesday. The trains had been carrying about 100 passengers, mainly commuters. Police said more people would have been travelling if it had not been a holiday week. Hundreds of emergency service workers, including mountain rescue teams, worked to save passengers at the crash site, where several derailed blue, yellow and grey train carriages lay on their side next to the track.

Transport Minister Alexander Dobrindt said the trains and track had been fitted with an automatic brake system that was introduced across Germany after 10 people died in 2011 near Magdeburg when a train driver drove through two red signals. “It’s one of the biggest accidents we have had in the last few years,” he said. Germany’s most serious post-war train accident occurred in 1998 when 101 people were killed near the northern town of Eschede after a high speed ICE train crashed.

Dobrindt said both trains on Tuesday must have been travelling at high speed entering a curve and the drivers had probably not seen each other. Police declined to comment on the cause of the crash. They appealed for people to donate blood. Chancellor Angela Merkel expressed shock and sent her condolences to families of the victims. “I trust that the authorities responsible will do everything they can to clear up how this accident could happen,” she said in a statement. Dobrindt said an investigation had begun and that the priority was to find out whether the cause was a technical problem or human error.

The trains’ operator, Meridian, is part of French passenger transport firm Transdev, which is jointly owned by state-owned bank CDC and water and waste firm Veolia. Transdev said in a statement that management and staff were terribly shocked by the “exceptionally serious accident” and that Chief Executive Jean-Marc Janaillac was at the scene. State-owned Deutsche Bahn is responsible for the track, which has a speed limit of 100 km per hour. The company said the safety system had been checked last week.