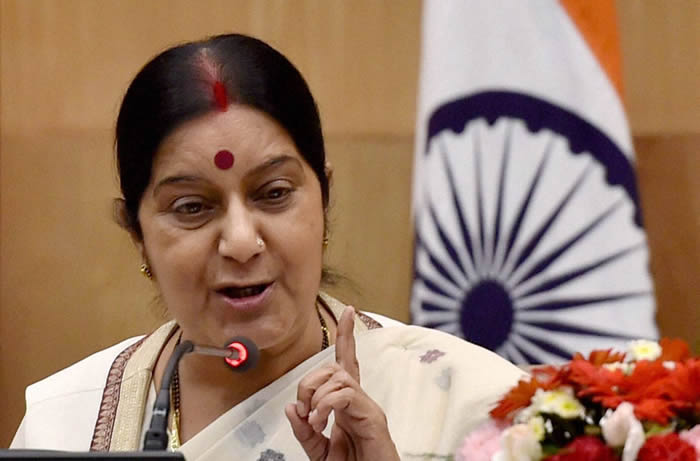 War with Pakistan not an option, talks to end terror: Sushma Swaraj

War is not an option and dialogue is the way forward with Pakistan to fight the ‘shadow of terror’, Indian Foreign Minister Sushma Swaraj told parliament on Wednesday. According to Press Trust of India, she told the Lok Sabha that India had decided to hold dialogue with Pakistan as it was the only way to remove the shadow of terrorism.

Ms Swaraj said Pakistan and India had decided to hold talks on terrorism when Prime Ministers Nawaz Sharif and Narendra Modi met in Ufa, Russia, in July and then in Paris.

“We said we can talk so that terrorism comes to an end. So talks (between national security advisers) took place in Bangkok where we discussed about terrorism. But one meeting will not bring a solution to all the problems. So we will continue the dialogue,” she said during Question Hour. When the Bharatiya Janata Party’s MP Ganesh Singh asked her whether India was exploring options like the US did to hunt down terrorists like Osama bin Laden, Ms Swaraj said her government was talking to Pakistan on the alleged terrorist camps in Pakistan-administered Kashmir as “war is not an option”.

PTI quoted her as saying: “We have decided that through talks we will resolve the issue of terrorism as talks is the way forward so that the shadow of terror is removed. But we want to make it clear, our prime minister has made it clear, that talks and terror can’t go together. Dialogue is drowned by the sound of explosion.” Ms Swaraj was speaking against the backdrop of the recent decision to re-start a ‘comprehensive’ dialogue with Pakistan under which various subjects, including terrorism and Jammu and Kashmir, will be discussed, PTI said. “The prime minister said let’s talk on terror. For talks we will have to put in faith. There is no third party. Through talks, both the countries are trying to resolve the issue of terrorism,” she said. Ms Swaraj said that following Mr Modi’s conversation with Mr Sharif in Paris on Nov 30 on the sidelines of the climate change summit and in line with the Ufa understanding between the two leaders, the national security advisers (NSAs) of the two countries met in Bangkok on Dec 6. “They held candid and constructive discussions. “During my recent visit to Pakistan on Dec 8-9, the two sides decided that the NSAs will continue to address all issues connected to terrorism.

“The Indian side was assured of the steps being taken to expedite the early conclusion of the Mumbai trial.” India would continue to take all necessary steps to safeguard the nation’s security and safety of all citizens, she said. Asked whether India raised the issue of alleged cross-border terrorism at international forums, Ms Swaraj said the government actively discussed the issue in all its forms and manifestations at multilateral forums, including the UN, EU, SCO, Asean Regional Forum, the Bay of Bengal Initiative for Multi-Sector Technical and Economic Cooperation and Saarc.