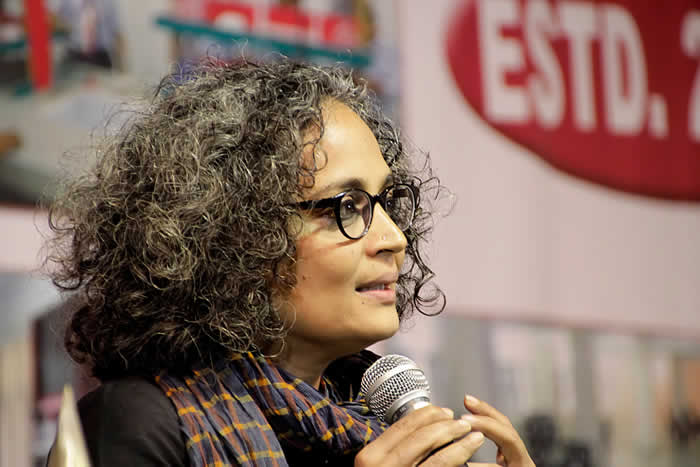 “I want to make it clear that I am not returning this award because I am ‘shocked’ by what is being called the ‘growing intolerance’ being fostered by the present government.”

She goes on to clarify her statement: “‘Intolerance’ is the wrong word to use for the lynching, shooting, burning and mass murder of fellow human beings. I cannot claim to be shocked by what has happened after this government was enthusiastically voted into office with an overwhelming majority,” she says. “These horrific murders are only a symptom of a deeper malaise. Life is hell for the living too. Whole populations ─ millions of Dalits, Adivasis, Muslims and Christians are being forced to live in terror, unsure of when and from where the assault will come,” Roy says. The writer says, “When the thugs and apparatchiks of the New Order talk of ‘illegal slaughter’ they mean the imaginary cow that was killed ─ not the real man that was murdered.

When they talk of taking ‘evidence for forensic examination’ from the scene of the crime, they mean the food in the fridge, not the body of the lynched man,” ─ an apparent reference to the recent Dadri lynching incident where a Muslim man was killed and his son injured after a mob beat them for keeping ‘beef’ in their fridge. Roy also touches upon a recent incident of caste-motivated violence: “When Dalits are butchered and their children burned alive, which writer today can freely say, like Babasaheb Ambedkar once did that ‘To the Untouchables, Hinduism is a veritable chamber of horrors,’ (Babasaheb Ambedkar Writings and Speeches, Volume 9 pg 296) without getting attacked, lynched, shot or jailed?” She laments the loss of the right to speak freely: “It doesn’t matter whether we agree or disagree with what is being said. If we do not have the right to speak freely we will turn into a society that suffers from intellectual malnutrition, a nation of fools.” Roy says New India has “enthusiastically joined” the race to the bottom prevalent across the subcontinent.