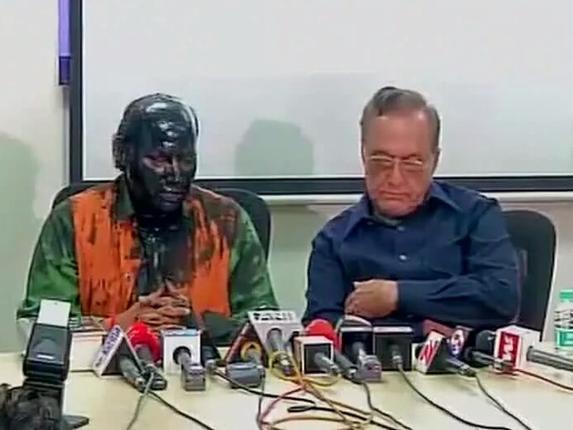 The former BJP ideologue said that the Shiv Sena workers threw black ink at his face for organising the book launch. “As soon as I stepped out of my house and got into my car, around 8-10 Shiv Sena workers attacked me and threw ink on my face,” Kulkarni told an Indian news agency.

He said the book launch will be held as scheduled despite threats from Shiv Sena. Kasuri is scheduled to attend the launch of his book Neither a Hawk nor a Dove: An Insider s Account of Pakistan s Foreign Policy on Monday. Mumbai is the capital of western Maharashtra state, which is ruled by the Hindu nationalist Bharatiya Janata Party in coalition with Shiv Sena. Shiv Sena had written to the director of Worli s Nehru Centre, the launch venue, to cancel the show because of the Pakistan connection. Condemning the ink attack on Kulkarni, Congress leader Digvijaya Singh said that Kasuri s book launch must be held at all costs and all liberals who are against such “Talibani hooliganism” must come out to support the event. The senior Congress leader asserted that such  intolerance  in India can t be tolerated.

The hostility between Pakistan and India dates back seven decades, and the two countries have fought three wars. The hostilities have been punctuated by periodic peace talks that have failed to resolve core issues including the Kashmir dispute.  The book is the first comprehensive account by a Pakistani Foreign Minister who directly contributed in moving the peace process with India forward. This was hailed as the most promising dialogue between Pakistan and India since Independence. It provides a detailed analysis of the Kashmir issue and the complex Pakistan-US-Afghanistan-India quadrangular relationship. Kasuri believes that, whenever two statesmen are at the helm in India and Pakistan, for improvement of relations, they would have to revert to the framework formulated during the author s tenure as Foreign Minister.

He Named Me Malala’: Portrait Of Girls’ Education Icon