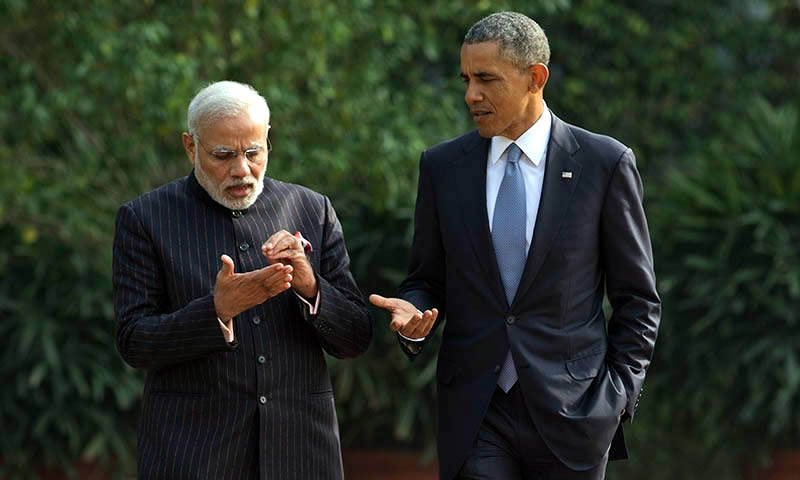 President Barack Obama and Prime Minister Narendra Modi agreed on a joint strategic vision for regions straddling Asia-Pacific and Indian Ocean on Sunday, but a close reading of the pact indicates a crucial role for Pakistan, though it was not named, as a conduit for carrying the proposed cooperation into Central Asia.

“To support regional economic integration, we will promote accelerated infrastructure connectivity and economic development in a manner that links South, Southeast and Central Asia, including by enhancing energy transmission and encouraging free trade and greater people-to-people linkages,” the US-India Joint Strategic Vision for the Asia-Pacific and Indian Ocean Region said. Analysts said reference to people-to-people linkages in the Obama-Modi document was lifted from the standard formulae used for years in Indo-Pakistan dialogues.

Moreover, the mention of Central Asia as a destination for all round connectivity was a clear give away for Pakistan’s role since neither China, nor Russia or Iran could be in the minds of the signatories. “As the leaders of the world’s two largest democracies that bridge the Asia-Pacific and Indian Ocean region and reflecting our agreement that a closer partnership between the United States and India is indispensable to promoting peace, prosperity and stability in those regions, we have agreed on a Joint Strategic Vision for the region,” the statement said.

It said India and the United States are important drivers of regional and global growth. “From Africa to East Asia, we will build on our partnership to support sustainable, inclusive development, and increased regional connectivity by collaborating with other interested partners to address poverty and support broad-based prosperity.” Regional prosperity depends on security, the Obama-Modi vision document said. “We affirm the importance of safeguarding maritime security and ensuring freedom of navigation and overflight throughout the region, especially in the South China Sea” The reference to overflight may not have been a mere clerical slip-up by India, which has used the ploy in the past to stop Pakistan’s civilian planes from using its airspace. “We call on all parties to avoid the threat or use of force and pursue resolution of territorial and maritime disputes through all peaceful means, in accordance with universally recognised principles of international law, including the United Nations Convention on the Law of the Sea,”

while the statement is clearly targets China, its implications are more varied. We will oppose terrorism, piracy, and the proliferation of weapons of mass destruction within or from the region,” the document said. A reference to Pakistan in a separate joint statement, the only time it was publicly named, in the context of terrorism, was slightly more nuanced than the formulation the two leaders had agreed in Washington in September last year. It reiterated Pakistan’s obligation to bring the perpetrators of the Mumbai carnage to book. US action against Dawood Ibrahim, Jamaatud Dawa, the Haqqani group among others was lauded and re-iterated. -dawn