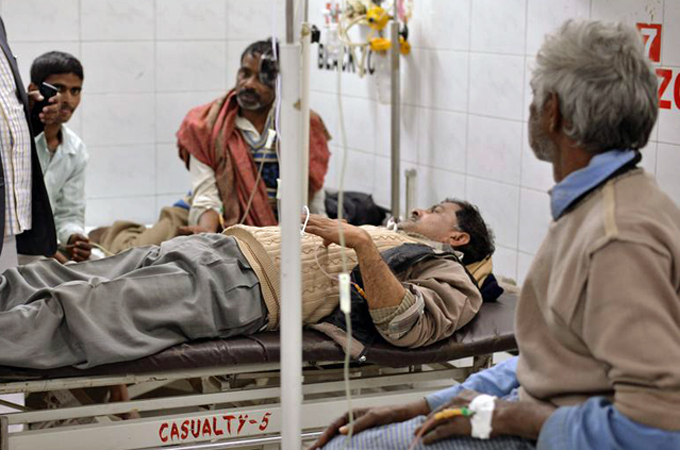 A bad batch of unlicensed bootleg liquor has killed at least 31 people out of more than 100 who had been admitted to a trauma centre in the north Indian state of Uttar Pradesh, the local government said.

The victims were taken to the King George’s Medical University Trauma Center on Monday after being poisoned by the illegally brewed liquor. Doctors said some patients were relying on artificial ventilation and some had lost their eyesight. Most of the victims were among more than 200 people who had gathered to watch a cricket match on Sunday evening in a village on the outskirts of the state capital, Lucknow, government official Anil Garg said.

Police arrested the shop owner who sold the 200-millilitre pouches of the homemade alcohol for about 30 cents each. A raid of the shop uncovered large containers of chemicals, which have been sent to a laboratory for testing, district official R K Pandey said.

“The symptoms gave a clear indication that these patients were served methyl alcohol,” which despite being toxic is sometimes mixed with ethyl alcohol to make a brew cheaper, Dr Kausar Usman, head of the trauma centre at Lucknow’s King George’s Medical College, told the Associated Press. Deaths from drinking illegally brewed alcohol are common in India where the poor cannot afford licensed liquor. Villager Rajesh Kumar, whose two older brothers became ill after drinking the unlicensed liquor on Monday, said the shop in Datli village was well known for selling inexpensive liquor, and that many men came from surrounding villages just to buy the brew.

The state’s highest elected official, Chief Minister Akhilesh Yadav, suspended six police officers suspected of taking bribes to ignore complaints against the shop and its alcohol and announced that a “drive will be launched against those involved in the illicit liquor trade”.

Reham Khan Dancing With Her EX-Husband

Reham Khan Dancing With Her EX-Husband