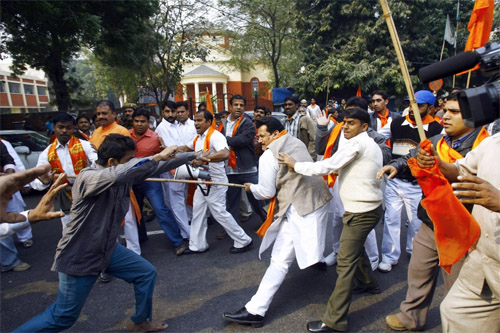 Authorities in India’s Gujarat state arrested at least 40 people after late-night clashes between Hindus and Muslims in the city of Vadodara and suspended mobile phone Internet and bulk text messaging services for four days, officials said on Sunday.

Crowds from the two religious communities pelted each other with stones and set several vehicles alight until police dispersed them using tear gas on Saturday evening after days of tensions in the city, police told Reuters.

Gujarat is the home state of Hindu nationalist Prime Minister Narendra Modi, who is currently in the United States and is scheduled to meet President Barack Obama. The state has a majority Hindu population and a history of religious conflict. At least 1,000 people, mostly Muslims, died in Gujarat in 2002 in violence between Hindus and Muslims. Modi was chief minister of the state at the time. The Hindustan Times newspaper reported this week that the trouble in Vadodara started with a posting on Facebook that some Muslims deemed offensive. Police in the city said mobile phone text messages and other social media had been used to spread messages about rioting and to inflame religious tensions.  [contentblock id=2 img=adsense.png]

The four-day suspension of the mobile Internet, bulk text messaging and MMS services began on Saturday, a crime branch official in Vadodara told Reuters on condition of anonymity. Residents in the city confirmed to Reuters that services were disrupted. Emboldened by Modi’s emphatic election victory in May, Hindu hardliners have been agitating in parts of India against religious minorities. A prominent right-wing Hindu group on Thursday warned Muslims and Christians against taking part in the Hindu Navratri festival as before. “We have made 40 arrests since last night and will make more to quell the rioting,” SK Nanda, Gujarat’s home secretary, said.

The police did not provide the number of injured in the clashes. On Sunday, the streets of Vadodara were calm but the authorities remained on alert. “Not many people are out due to fear of recurrence of violence,” said a senior state government official, who did not wish to be identified.

“We are keeping a close eye on the situation.” For long Modi was denied a visa by the United States over allegations of religious intolerance stemming from Gujarat riots in 2002. Critics have accused Modi of allowing the riots to happen, but courts have found no evidence to indict him.
The state has largely been peaceful since then. -nation