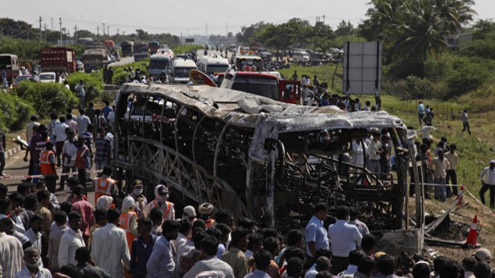 Indian police said at least six people were burned to death and another 12 seriously injured when a bus caught fire in southern India.

Police official Srinivas Murthy said the injured in the accident early Wednesday were hospitalized in Karanataka state. Murthy added that the fire was caused by a leak in the diesel fuel tank of the bus which carried 29 passengers. The accident occurred near Davanagere, a village nearly 260 kilometers northwest of Bangalore, the state capital.

More than 110,000 people are killed every year in road accidents across the country, according to police. Bus accidents due to reckless driving, bad roads and poorly maintained vehicles are common in India. -Dawn