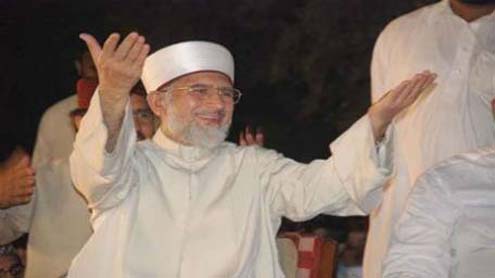 NEW DELHI: India on Saturday refused visa to Pakistan Awami Tehreek chief Tahirul Qadri. According to reports, the reason for this visa plea rejection has not been disclosed yet.

Canada-based Pakistani scholar Qadri was scheduled to address at least 40 events in India over a month in 40 Indian cities.

Minhajul Quran International (MQI) in a statement expressed utmost dismay over the Indian government’s decision. Qadri had visited the country several times before.

The visa denial has left Qadri’s hosts, Observer Research Foundation (ORF), Mumbai and Minhajul Quran International (India), distraught and his followers disappointed. “It is shocking as Dr Qadri has millions of followers in India, and it is not the first time he is visiting the country,” said an MQI spokesperson.

The statement added that all the programmes were organised after MQI (India) and ORF held talks with the Indian home minister. ORF Mumbai Chairman Sudheendra Kulkarni along with MQI (India) President Rafeeq Ahmad Khan called on Indian Home Minister Sushil Kumar Shinde last week and briefed him on Qadri’s background.

“Shinde had promised us that he would hold a meeting with officials and try to sort out the issue,” said Khan. Kulkarni, while talking to reporters, said, “Officials in the Home Ministry told us that Dr Qadri’s visa has been denied because of Intelligence Bureau’s (IB) note. We were not informed on what grounds the IB has issued the note in question,” Kulkarni added.

Kulkarni said that since Qadri is a well-known figure and during his last visit to India in 2012 he had addressed huge rallies, it was surprising that the officials were delaying clearance of his visa. Now, Tahirul Qadri will expectedly address the gatherings through video conference.-dailytimes