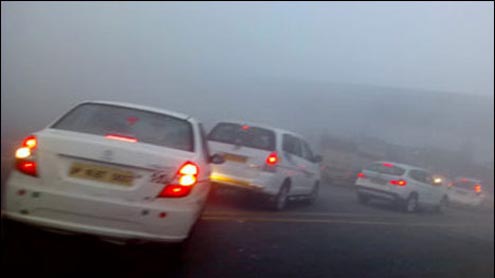 NEW DELHI: At least 4 persons killed and 9 injured in a road accident due to dense fog on Yamuna Expressway.

Dense fog continued to disrupt train and air services in Delhi for the second consecutive day on Tuesday. Operations at IGI airport came to a standstill as dense fog affected 74 domestic and 25 international flights.The fog started to become dense around 5 AM and the visibility went below 50 metres, the minimum required for landing under poor visibility conditions using the CAT-III B instrument landing system (ILS).

The dense fog also delayed trains coming to or going out of Delhi. Railway officials said at least 14 trains are delayed. Delhi and NCR witnessed winter’s first fog on Monday throwing road and air traffic out of gear. Schedules of around 140 flights were badly affected. Nine flights were diverted while eight were cancelled.

The dense fog also delayed trains coming to or going out of Delhi.Besides Delhi NCR a thick blanket of fog has also been reported from cities like Lucknow, Amritsar and Varanasi. thenews