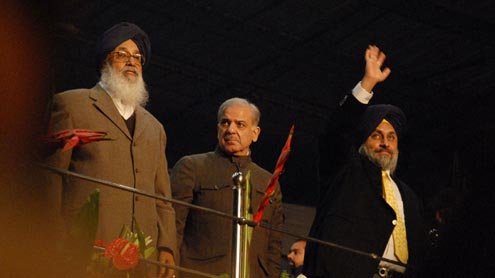 If India-Pakistan talks appear to have hit the doldrums, the chief ministers of Punjab provinces on both sides would have none of it. They issued instead a joint statement on Sunday that, in a limited sense, goes beyond the stymied ambitions of their national bureaucracies, possibly even their political masters.

The joint statement, believed to be the first such exercise between any two provinces of India and Pakistan, has proposed the free movement of academicians, students and interns, an idea that the home ministry in India would have none of.

The ministry openly discourages academics and intellectuals from almost any country to travel and communicate freely inside the world’s largest democracy. But India’s Punjab could prove to have the clout to make this change.

During the interaction between Pakistan’s Punjab Chief Minister Shahbaz Sharif and his Indian counterpart Parkash Singh Badal, “it was mutually agreed to promote cooperation for the common interest of peace, harmony, economic growth and leveraging each other’s potential,” said their statement. It was issued in Amritsar at the end of Mr Sharif’s five-day tour of India during which he met Prime Minister Manmohan Singh and other high-ranking officials in Delhi.

During the trip to Punjab, Mr Sharif visited the Punjab Agriculture University Ludhiana and also addressed the ‘Conference on Punjab-Punjab Cooperation’ organised by the Confederation of Indian Industries (CII). He also held meetings with Mr Badal and Deputy Chief Minister Sardar Sukhbir Singh Badal and their delegation.

Recognising the benefits of mutual cooperation both sides agreed to facilitate exchange of academicians, experts and researches and to promote community contacts and understandings through exchange of delegation consisting of professionals and practitioners from different sectors, including agriculture, trade, industry and commerce.

The two would encourage exchange of students and interns from different educational institutions; that would “promote people to people contact through encouragement, development and participation in sports, cultural and tourism activities”.

A favourite subject of the two Punjabs, the chief ministers focused on the promotion of cooperation and sharing of learning in livestock sector, including dairy development, breed improvement, vaccinations, animal husbandry, veterinary sciences and water management.

They would encourage holding of joint workshops, training programmes and R&D projects in agriculture and allied sector, especially crop improvement.

Manufacturing of agriculture machinery and implements, exchange of knowledge and experiences in health and education sectors were the other topics mentioned in the statement.

The two provinces would share each other’s experience and good practices in land administration and public service delivery systems for improvement of governance and public facilitation. They would pursue policies for easy access for people of both sides to religious places of their respective faith. They would press for policies to reduce trade barriers for promotion of business and encourage new routes of trade.

Both the chief ministers resolved to pursue with their respective central governments to facilitate enhanced cooperation and formulate supportive policies in this regard. -Dawn