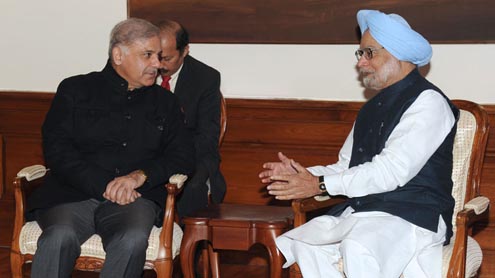 Indian Prime Minister Manmohan Singh on Thursday got a formal invite from his Pakistani counterpart Nawaz Sharif for visiting that country, which was accepted, The Economic Times said.

The invite was handed over to Dr Singh by Mr Sharif’s Special Assistant Tariq Fatemi and Chief Minister of Punjab Shahbaz Sharif who met the Indian prime minister for about half an hour.

Shahbaz Sharif was quoted as telling a group of reporters that the prime minister’s goodwill message was handed over to Dr Singh along with the invitation. Asked about the response, he said Dr Singh had accepted the invitation. “Let us see”.

Pakistani leaders have been extending invitation to Singh for the last few years but the Indian leader has said his visit would depend on the situation on the ground in terms of terrorism and the LoC Pakistan High Commission said the message of goodwill from Nawaz Sharif emphasised “Pakistan’s desire to forge friendly and cooperative relations with India in the interest of peace and prosperity of the people of the two countries and of the region.”

The chief minister’s unusual meeting as protocol goes assumes significance given the disappointment expressed by India over the progress on agreed outcome of the meeting between Nawaz Sharif and his Pakistani counterpart in New York in September.

Besides Mr Fatemi, the Punjab chief minister was accompanied by Minister of State for Commerce Khurram Dastagir Khan and Provincial Minister for Education Rana Mashood Khan and High Commissioner Salman Bashir. The chief minister also underscored the importance of resumption of dialogue and peaceful resolution of all issues. Dawn