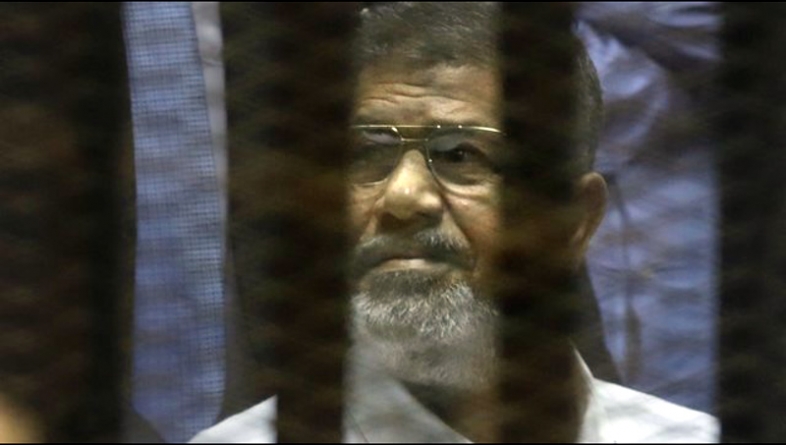 Muslim Brotherhood leader Mohamed Morsi was sentenced to 20 years in prison on charges arising from the killing of protesters on Tuesday, nearly three years after he became Egypt’s first freely elected president.

Morsi stood in a cage in court as judge Ahmed Sabry Youssef read out the ruling against him and 12 other Brotherhood members, including senior figures Mohamed el-Beltagy and Essam el-Erian. The sentencing was broadcast live on state television. The men were convicted on charges of violence, kidnapping and torture stemming from the killing of protesters during demonstrations in 2012. They were acquitted of murder charges, which carry the death sentence. Displaying a four-finger salute symbolising resistance to the state’s crackdown on Islamists, defendants chanted “God is Greatest” after the verdict was read. The ruling is the first against Morsi, who says he is determined to reverse what he calls a military coup in 2013 staged by then army chief, now president, Abdel Fattah al-Sisi. “His trial has been a travesty of justice, which has been scripted and controlled by the government and entirely unsupported by evidence,” Amr Darrag, a former minister under Morsi, said in a statement from Istanbul. A lawyer for some of the defendants said they would appeal. After toppling Morsi following mass protests against his rule, Sisi proceeded to crush the Brotherhood.

Which he says is part of a terrorist network that poses an existential threat to the Arab and Western worlds. The Brotherhood says it is a peaceful movement that will return to office through people power, even though demonstrations have fallen to a trickle. Egypt’s deep state apparatus — the Interior Ministry, intelligence services and army — now appears to have a tighter grip than ever on the biggest Arab state.

While Morsi has become far less relevant, even within the Brotherhood, Sisi became president after elections last year, winning over many Egyptians who overlooked widespread allegations of human rights abuses for the sake of stability. Western powers that called for democracy declined to use leverage against Sisi, the latest military man to seize power. Morsi, who rose through the ranks of the Brotherhood before winning the presidency in 2012, was a polarising figure during his troubled year in office, which followed the fall of veteran autocrat Hosni Mubarak in 2011.

His policies alienated secular and liberal Egyptians, who feared that the Brotherhood — the main opposition to Mubarak for decades and popular among many Egyptians for its charity work — was abusing power. Protests erupted in late 2012 after Morsi issued a decree expanding presidential powers — a move his supporters say was necessary to prevent a judiciary still packed with Mubarak appointees from derailing a fragile political transition. Those demonstrations led to the deaths of protesters, for which prosecutors argued that Morsi and other Brotherhood leaders were responsible. Morsi and his co-defendants denied the charges. Reda Sanoussi, the brother of one of the victims, was dissatisfied with the dismissal of the murder charges against Morsi. “I want to enter the cage and pull out his intestines,” he told Reuters. – Reuters