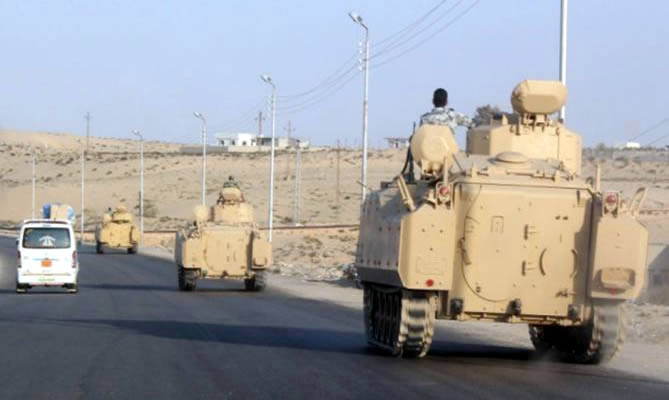 Militants fired a barrage of rockets and set off a car bomb Thursday killing at least 26 people, mostly soldiers, in Egypt’s North Sinai province, where security forces are battling a raging Islamist insurgency.

The deadly assaults were swiftly claimed by the Egyptian affiliate of the Islamic State group that has captured chunks of territory in Syria and Iraq.

Jihadists have regularly attacked security forces in the Sinai Peninsula since Islamist president Mohamed Morsi was ousted by then army chief and now President Abdel Fattah al-Sisi in July 2013. They say this is in retaliation for a bloody government crackdown against Morsi supporters that has left hundreds dead, thousands jailed and dozens sentenced to death after speedy trials that the United Nations says are “unprecedented in recent history”. The main focus of Thursday’s attacks was El-Arish, the provincial capital, where a military base, a police headquarters, a residential complex for army and police officers and several army checkpoints were targeted in the biggest such simultaneous assaults since October, officials said. Twenty-five people, mostly soldiers, were killed when several rockets and a suicide car bomber struck the targets within minutes. Terrorist elements have attacked several police and army headquarters and facilities using explosive-laden vehicles and rockets,” the military said in a statement, adding there was an exchange of fire between troops and militants.

The Islamic State group’s Egyptian affiliate, Ansar Beit al-Maqids, claimed the assaults in a Twitter account linked to it. Egypt’s deadliest jihadist group said it “executed extensive, simultaneous attacks in the cities of El-Arish, Sheikh Zuweid and Rafah” in North Sinai. Security officials said militants first fired rockets at the El-Arish police headquarters, the military base and the housing complex, which was followed quickly by a suicide car bombing targeting the rear gate of the military base. They said the death toll was high in El-Arish as a group of soldiers and officers were gathered at the rear gate of the military base when the car bomber attacked.

Militants also attacked a military checkpoint south of El-Arish, wounding four soldiers. In a separate assault an army officer was killed when a rocket struck a checkpoint in the town of Rafah, on the border with the Gaza Strip. Overall, officials said at least 62 people were wounded in the attacks in North Sinai. In another incident a police officer was killed when struck by a bomb in the canal city of Suez, while a suspected militant mistakenly blew himself up in Port Said while planting a bomb.

The El-Arish attack was the deadliest since an October 24 assault, also near El-Arish, when militants killed 30 soldiers and wounded scores more. It came despite a series of security measures implemented by the authorities in North Sinai since the October attack. That attack prompted the authorities to build a buffer zone along the Gaza border to prevent militants infiltrating from the Palestinian enclave. The authorities have also imposed a state of emergency and night-time curfew in parts of North Sinai since October. US State Department spokeswoman Jen Psaki condemned Thursday’s attacks, and vowed that Washington “remains steadfast in its support” of Cairo’s efforts to combat terrorism. Late last year Washington delivered 10 Apache helicopters to Egypt for joint counter-terrorism operations in the Sinai Peninsula.

The Egyptian military said Thursday’s attack was the result of “successful operations” carried out against jihadists by the security forces, and “the failure of Muslim Brotherhood… in spreading chaos on the fourth anniversary of the 25 January revolution” which was marked on Sunday. On January 25, 2011, millions of Egyptians protested against then leader Hosni Mubarak, forcing him to step down.

On Sunday as Egypt marked the anniversary of the revolt, clashes between protesters and police left 20 people dead, mostly in Cairo, triggering fresh tensions in the capital. Since Mubarak’s ouster Egypt has been rocked by political and economic turmoil, leading to a security vacuum in the Sinai Peninsula. Jihadists have killed scores of policemen and soldiers, mostly in the peninsula, but the authorities have blamed these attacks on Mubarak’s successor Morsi’s Muslim Brotherhood movement. The Muslim Brotherhood denies the charges. The army has poured troops and armour into the peninsula to fight the insurgency that has rapidly flared since Morsi’s ouster. Ansar Beit al-Maqdis (Partisans of Jerusalem) has claimed most of the attacks, including the deadly October assault. The group pledged its allegiance to the Islamic State group in November. (AFP)